Organizers of Tent State University said today they are moving their protest from City Park to Cuernavaca Park.

The 29-acre Cuernavaca Park is surrounded by Interstate 25, the Mailwell envelope factory, 20th Street and the HOV (high occupancy vehicle) fly-over, railroad tracks and the Flour Mill Lofts. It was planned as a neighborhood park for the Highland community.

It's also less than a mile from the Pepsi Center.

It was also announced that the city is making the parking lot of the Denver Coliseum, 4600 Humboldt St., available to the group for overnight camping.

Funny, it doesn't appear on the Coliseum event calendar. No stock yard, though.

However, an organizer said demonstrators can do that but many are still planning to sleep in the demonstration zone around the Pepsi Center.

Tent State organizers have said say they expect about 50,000 people to participate in anti-war demonstrations from Aug. 24-27 during the Democratic National Convention.

Jojo Pease, a spokeswoman for the group, said organizers made the decision to go someplace other than City Park after holding more than 25 meetings with neighborhood groups, the Denver Zoo, police, city officials and others.

"Organizers feel that listening to concerns of the community that you're going into is something that we need to do because one of our biggest problems with the government ... is that they don't listen to us," she said.

It doesn't understand you, either, does it, poor baby?

"So, for us to not listen to what other people are saying would be completely hypocritical. In light of that and in light of other events that have happened ... we have decided to move to a different permanent area."

Only one problem, or rather, almost the same raft of problems they had at City Park (toilets, water, camping not allowed in any city park, etc.) along with a new one: they don't seem to have a permit for the full four days at Cuernavaca Park.

Thought I had pics of the park, and I probably do, just insufficiently labeled. One open expanse of grass is much like another. So instead here's a picture of the skate park next to Cuernavaca: 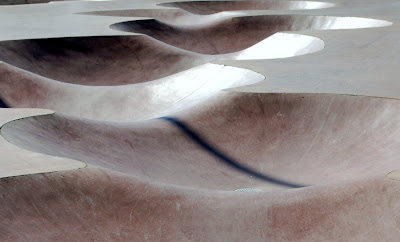 Each indentation will hold 3-5 protesters. No tents, no skateboards after 6 p.m..