Sunday Night at the Radio!

And one last bizarre DNC juxtaposition.

The juxtapo: At the pro-troops rally at Pioneer Monument last Sunday, it was hard not to notice this guy: 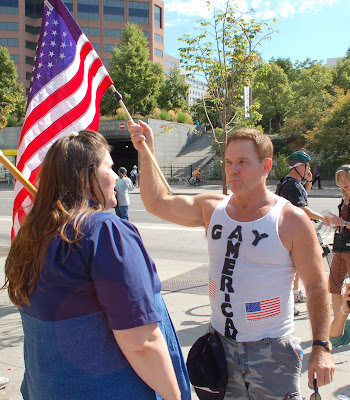 Didn't realize it at the time, but that's Mike Jones, destroyer of Pastor Ted Haggard and an occasional subject of D-blog "humor." Never mentioned him in the context of the DNC, though. When worlds collide.

And a Vic and Sade. A little tinny, but an absolute classic: "Honorary Titles" (4 January 1943). Great wartime PSA at the end, too.
Posted by Focko Smitherman at 6:56 PM