In The Atlantic, Wendy Kaminer wonders if the Colorado Supreme Court's slapdown of Ward Churchill means "The End of Free Speech at University of Colorado [sic]?" Yeah, there's a question mark at the end, but Kaminer's answer, of course, is an unequivocal "yes." And not just at CU, natch.

To reach that conclusion, Kaminer starts with, and continually hammers, one assumption: the jury in Ward's suit against CU found that the school had fired him for his offensive ("Li'l Eichmanns") speech; his "research misconduct" was just an excuse the school ginned up to get rid of him. So ruled the jury, so believes Wendy. She's also not crazy about the "quasi-judicial immunity" stuff, which, who is (Update V)? (Neither Neal nor ACTA, by the way, has commented on the CSC's decision yet, as far as I can find.)

Posted by Focko Smitherman at 2:23 PM No comments:

Found in a pile of weird books: 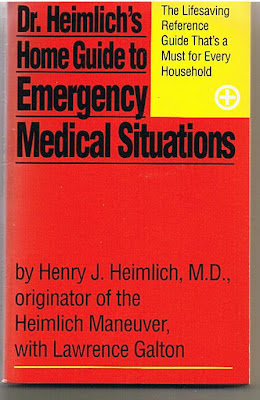 "Look at the Bleeding." Endowing a child with a healthy attitude about bleeding and other emergencies.

Dad: See how your blood sprays almost to the ceiling, Billy? That's how powerful the heart is. Now, let's see how high it'll go when I perform that new maneuver on you . . .

Okay, "Poisonings. What to have available in advance . . ." Not very good phraseology, huh? And how does Henry work the maneuver in for poisonings?

Husband: Oh, my God, Mary! What's wrong with her, Doctor?

Doctor: I smell bitter almonds, the invariable sign of cyanide poisoning! Here, hold her upright so that I may perform the Heimlich Maneuver! It will expel the poison through her eyeholes!"

Maybe not. Okay, abdominal pain. Surely the Heimlich is appropriate there. Say, if you need your appendix burst or something. GAck. 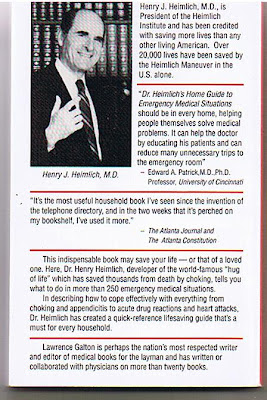 Posted by Focko Smitherman at 11:51 AM No comments:

Figure out the typo!

The Jefferson Park (my neighborhood) News: "Street Closures: The following streets will be closed from 4 a.m. to approximately 1:00 a.m. on Sunday, October 7 . . ."
Posted by Focko Smitherman at 12:57 PM No comments:

Steeeerike two! Since the D-blog missed the story by a mere 24 hours, he'll throw you to Mr. Pirate Ballerina, who has the interesting facts and figures as well as other stuffs both educational and amusing, like that Wart sold his Boulder house and moved to Atlanta a few weeks ago, a sign that even he knows he's not going to be teaching at CU (or likely anywhere else, for pay) again.

D-blog prediction: The U.S. Supreme Court has more important things to fuck up and will decline to hear Wart's case.

Anyway, as penance for being so late on this I waded through the comments at the AP story the Post lazily went with. Anti-Wart by a huge margin, but still, and as usual with newspaper comments, profoundly dumb (with a couple of exceptions I'll let you not look for).

But I noticed something odd. Look at how the Post notes those comments that have been edited by the commenters who make them. The Post will say, for example, "Last edited by _______ [the commenter], on Yesterday, 6:48 p.m., edited two times in total."

"Updated," not "edited." And no hint on how many times it's been edi--updated. Strange.

But I depress. If this were a blog that, like some, encouraged the dipping of dangling anatomical parts into containers of artificially flavored, HFCS-sweetened trifle at moments of triumph, this CSC decision would warrant one of those itty-bitty kiddie-pac pudding thingies (those who have read Portnoy's Complaint no doubt will find a use for the bologna that's in the little sandwich as well).

Think I'll go back to bed.

After all, Lane continues, "no one ever said Ward Churchill's First Amendment rights weren't violated.

The man is truly insane. But he's realistic enough about his chances with the U.S. Supremes:

"I don't have a lot of hope," he admits. "We should win, because the law should be on our side -- and I think it is on our side. So this is our last shot. But the statistical odds of the U.S. Supreme Court taking this case are pretty slim."

Read whole thing for other nuggets and the overly circumspect statements of CU prez Bruce Benson and chancellor Phil DiStefano.
Posted by Focko Smitherman at 4:47 AM No comments: Actually last week, but whatever. Picasa for some reason wouldn't let me upload pics of my amazing journey (or anything else). Now it will. This after all the problems I've had with Blogger working on Google Chrome and with Echo barring me from my own comments. I'm moving to Wordpress.

As soon as I work up the courage. In the meantime, travel pics 'n' persiflage! The pic above has nothing to do with the trip, it's just a creepy clown a neighbor gave me. I was going to try to freak out the tenants around back by moving it incrementally closer to their door every day, but the evil little 'tard gave me the heebie-jeebies, so it ended up here: 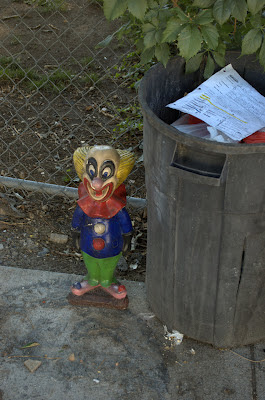 Pics of trip some time or other! Wait here until they appear! It might be a little while!

Posted by Focko Smitherman at 6:31 AM No comments:

The D-blog has one for when Ma comes visitin'

Post: "Stunt family brings thrills to Loveland."
That's kind of a lascivious headline, isn't it? Or is that just me?
Posted by Focko Smitherman at 2:25 PM No comments: