Another note from Toonces (no salutation):

I know we've been contacting you more than usual lately. It reflects the reality that the campaign season is already ramping up -- whether it feels early or not.

So we have a dilemma. While our opponents are campaigning full time, I'm busy doing the job I was elected to do. There will be a moment when I can be part of this campaign in a bigger way, but it won't come for a while.

But that doesn't mean you can slow down. I need you to help pick up the slack.

Midnight tomorrow is an important deadline. The Vice President and I would love to meet you. Please give $5 now to support this campaign -- you'll be automatically entered to join us for dinner when you do [link follows].

What happened to "No purchase necessary"?

Geez, I beat Ace or an Ace-like entity on the "dinner with Barack" contest by a ton. Eeeeeeee! But he also linked to a later video where Barack announces that Joltin' Joe will be there too. Eeee--aw, fuck it.
Posted by Focko Smitherman at 10:16 AM No comments:

Went over there to see the reaction to Weiner's resignation. Eh. Lots of people saying he was an egregious dick who deserved to lose his job; at least as many defending him and excoriating Dem leadership for forcing him out. Whatever. Taglines!

Let the yoke fall from our shoulders; Don’t carry it all, don’t carry it all; We are all our hands and holders; Beneath this bold and brilliant sun; And this I swear to all - The Decemberists.

Ayn Rand’s philosophy... reduces itself to: "I’m on board; pull up the lifeline."- Roger Ebert

Please Help Me Volunteer in Haiti

"We can have concentrated wealth in the hands of a few or we can have democracy, but we can't have both."-- Justice Louis Brandeis

I am living proof that a person living with AIDS can still enjoy the passion of lovemaking. AIDS is no longer a death sentence!

Full Disclosure: I am an unpaid shill for every paranoid delusion that lurks under your bed - but more than willing to cash any checks sent my way

Resident Palin - even if she did take up residency in the White House in 2012, it's too painful to use the "P" word combined with her name

"My father always told me that all businessmen were sons of bitches, but I never believed it until now." - JFK during the 1962 Steel Crisis

Every moment in life contains an off ramp. Never be afraid to use it.

Posted by Focko Smitherman at 1:05 PM No comments:

I've set aside time for four supporters like you to join me for dinner.

We didn't get here doing that, and we're not going to start now. We're running a different kind of campaign. We don't take money from Washington lobbyists or special-interest PACs -- we never have, and we never will.

We rely on everyday Americans giving whatever they can afford -- and I want to spend time with a few of you.

Eeeeeee--wait a minute. Whaddaya mean, "a few of you"? But I want you all to myself, you yummy hunk of man-child, you.

So if you make a donation today, you'll be automatically entered for a chance to be one of the four supporters to sit down with me for dinner. Please donate $5 or more today:

We'll pay for your flight and the dinner -- all you need to bring is your story and your ideas about how we can continue to make this a better country for all Americans.

Who's this "we" who's paying for stuff again?

This won't be a formal affair. It's the kind of casual meal among friends that I don't get to have as often as I'd like anymore, so I hope you'll consider joining me.

But I'm not asking you to donate today just so you'll be entered for a chance to meet me. I'm asking you to say you believe in the kind of politics that gives people like you a seat at the table -- whether it's the dinner table with me or the table where decisions are made about what kind of country we want to be. . . .

I've said before that I want people like you to shape this campaign from the very beginning -- and this is a chance for four people to share their ideas directly with me.

Hope to see you soon,

Update: Just noticed that Katherine Archuleta, formerly Denver Mayor John Hickenlooper's senior advisor in charge of dealing with Rec!reate!68 before and during the Democratic National Convention in 2008, has been named director of Obama's reelection campaign. Probably on Glenn Spagnuolo's recommendation.
Posted by Focko Smitherman at 6:53 AM No comments:

Tonight's lunar eclipse wasn't going to be visible in the U.S., but I took a pic of the moon over the parachute ride at Elitch's amusement park on the edge of downtown Denver anyway. There were some fireworks going on too, but none of those turned out. 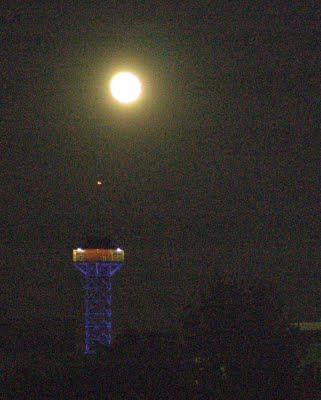 He said as if this one did.

Posted by Focko Smitherman at 8:41 PM No comments:

Climate change should not be included in the national curriculum, the government adviser in charge of overhauling the school syllabus in England has said.

Tim Oates, whose wide-ranging review of the curriculum for five- to 16-year-olds will be published later this year, said it should be up to schools to decide whether – and how – to teach climate change, and other topics about the effect scientific processes have on our lives.

"Oxidation and gravity don't date." Irresistible implication: climate change does, and has.

Climate change has featured in the national curriculum since 1995. In 2007, the topics "cultural understanding of science" and "applications and implications of science" were added to the curriculum for 11- to 14-year-olds.

But Bob Ward, policy and communications director of the Grantham Research Institute on Climate Change and the Environment at the London School of Economics, warned that Oates' ideas might not be in pupils' best interests and could make science less interesting for children.

"An emphasis on climate change in the curriculum connects the core scientific concepts to topical issues," he said. "Certain politicians feel that they don't like the concept of climate change. I hope this isn't a sign of a political agenda being exercised."

He hopes this isn't a sign of a political agenda being exercised. Hahahahahahahahahahah--I can't feel my feet.
Posted by Focko Smitherman at 10:51 PM No comments:

Post: Wart case should be canned by Colorado Supreme Court

Well, duh. Not gonna link, for reasons readers if any will know. Here's a quote the Post uses from one of the several thousand committees that found Wart to be a liar and cheat:

"To put it most simply, it was part of a pattern and consistent research stratagem to cloak extreme, unsupportable, propaganda-like claims of fact that support Professor Churchill's legal and political claims with the aura of authentic scholarly research . . . "

Well, duh. We'll see. I'd laugh about this, but once a panel of judges gets to decide things it's anybody's guess.
Posted by Focko Smitherman at 12:23 PM No comments:

Ace and various cob-loggers at AoSHQ (no link, you know where they are) have been posting about Wienergate almost nonstop. Hit and miss, but as usual the commenters rescue some not-all-that-funny posts and kick a couple of funny ones into hyperdrive.

What I can't figure out is, why would anyone, ever, post a picture of himself on the fucking interwebs, let alone of his penis? I've been doing this blogging shit for almost six-and-a-half years, and I've never posted a pic of myself, nor ever will.