Noticed in the last week or so that some server (Blogger?) has inserted a little code that takes the particular word you put the cursor over in whatever text you're reading and translates it into various languages. Annoying, but apparently easily disabled.

Anyway, my cursor happened to roll over the word "boy" in a comment to a Tim Blair post, and among the translations was "serviente indigena." Spanish, I guess, or maybe Portagee, but, WTF? Has anyone who actually knows the language (whatever it is) ever seen this usage?

Idiots all (but some more than others)

Commencement speech at the University of Arizona by Sandra Soto, professor of gender and women's studies:
She's a sack of po-mo crap, of course, and does the usual misrepresentation of AZ's SB 1070 (racial profiling!). The gradutates are duly (but, crucially, unorganizedly) upset at the Hedges-like hijacking of their moment. But listen to the guy close to the camera: "This is Amurica!" "Cut your hair! Bitch!" Big Journalism (via) calls this the "Morning feel-good video." It didn't make me feel very good, except, again, that it was spontaneous anger at a fool, rather than the typical organized violence-courting jerkishness of the left. I assume the "Amurica" guy was AU's valedictorian.
Posted by Focko Smitherman at 1:36 PM No comments:

Somebody broke into my car last night

Well, "broke into" is an exaggeration, since every door was unlocked, as always. Unusually, though, I hadn't left the keys in the damn thing.

But besides the load of gold from my latest Brinks heist, you know what they got?

My fancy six-dollar tire gauge. And maybe the fat-body pen I like to sign checks with. (Sorry, I mean "pen with which I like to sign checks.") But I'll probably find that under the passenger seat sometime, stuck to the carpet made sticky a couple of years ago when Josie and Miss Peabody managed to open a can of OJ I'd just bought that, naturally, dumped under the seat where they couldn't get to it. Nobody profited, classic zero-sum. But it almost doesn't stink anymore.

Kids! Stay in school! And you won't have to drive a car like mine! Except under Obama! Then you'll be forced to! (See how topical I am?)
Posted by Focko Smitherman at 7:54 PM No comments:

Cold and rain. Right now, in fact, it's sleet. Supposed to rain up to a couple of inches overnight and tomorrow. I'm betting it'll turn into heavy, wet snow and deform all my flora. Sleet. I mean, sheet. AGWMA.

Scarily (well, not really), this has been a very cool spring. Just like last year. Ice Age! Being an albino (self-identification, man), I love it, despite the small inconveniences. Definitely not a heat person, even though I grew up in Central Illinois, which in the old days often reached 97 degrees and 95 percent humidity, and we hung out in the third-floor attic of a friend's house, smoking pot, watching Barney Miller and Soap, and sweating. Didn't bother me then. Or maybe it did. But there was pot. And Barney Miller.

Update: It's a thunder-snow storm. Dogs no like.
Posted by Focko Smitherman at 4:24 PM No comments:

So the other day I was hunched over the computer in my palatial office in the attic (right at the front of the house, with a splendid view of both the neighborhood and the Denver skyline; a survivalist-leaning acquaintance once told me it had the makings of a good sniper's nest) when I heard yelling and screaming nearby.

The bikie, tho, as I was watching, took his lock, one of those u-shaped titanium things, and smashed out one of the the back windows of the other guy's fairly nice, fairly late-model Honda.

It was on. Car-guy gets some sort of metal rod out of his car, and they start swinging at each other with potentially skull-crushing objets.

Hero that I am, I opened the window and yelled, "I'm calling the cops, right now!" But before I even got the words out a city vehicle (not a cop car) had pulled up and a short, potbellied, 60ish, balding man got out, unhesitatingly put himself between the two submorons, and broke up the fight.

Then cops and amba-lamps and other vehicles started showing up. Car-guy gets back in his car and cranks backwards real fast for half a block, turns around in the alley, and starts driving away. A cop car coming down the opposite way semi-blocked him. Hilariously, car-guy pulls up to the cop car and says, "I'm not running away! Look what he did to my window!"

Don't know if they got him. Odds, of course, are that they did. 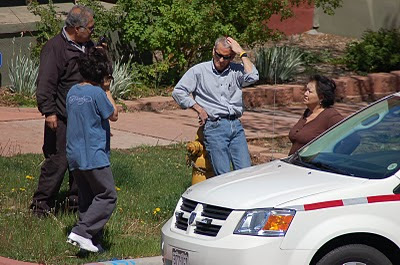 Sorry I didn't get pics of the melee, but the camera had the wrong lens on (stupid camera), the other was somewhere else and etc. To make up for it, here's an urban cairn somebody placed on the opposite corner yesterday, no doubt to mark the way to Crackville: 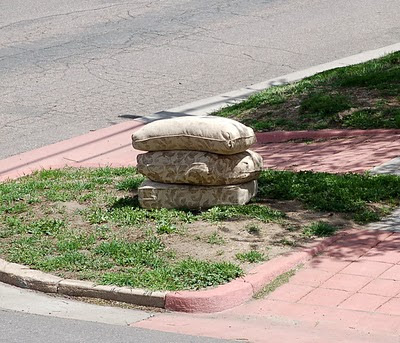 Plush life!
Posted by Focko Smitherman at 11:53 AM No comments:

The University of Colorado is asking the state appeals court to uphold a lower court’s refusal to reinstate former Prof. Ward Churchill, who headed CU’s ethnic studies department until controversy over an essay he wrote led to an investigation into his scholarship and to his ultimate dismissal. . . .

In a 67-page brief filed May 7, CU said that when controversy initially arose about the 9/11 essay, the Board of Regents met, not “trying to find a cause for dismissal,” but to determine whether Churchill’s speech constituted grounds for dismissal and, if so, whether it was protected by the First Amendment. Regents concluded the essay was constitutionally protected political expression “in spite of the damage it may have caused.”

“Had unrelated allegations of research misconduct not arisen against Professor Churchill during (Interim) Chancellor (Philip) DiStefano’s investigation, the matter would have been closed,” the brief states, but since they arose at the same time, DiStefano believed the research allegations should be addressed just as “sanctionable criminal activity” would be examined under the same circumstances.

Despite Churchill’s assertion that the investigation of his work was an adverse action, an employer may “undertake an investigation, even when that investigation stems from an employee’s otherwise protected speech” in order to balance the employee’s interests “against the realities of the workplace,” it states.

“One of those (employment) realities is that a public employee’s speech (including political speech) can disrupt the workplace, and, when disruption occurs, the employer may terminate the employee,” the brief states.

Citing various legal precedents, CU argued that Regents, acting as judicial officers, would be entitled to quasi-judicial immunity even if the action taken was “in error, was done maliciously, or was in excess of (their) authority,” since the designation applies to the nature of the decision, not the officials’ conduct in a particular case.

“Obvious facts” can narrow a quasi-judicial action’s discretion, but the Regents terminated Churchill’s employment after fellow faculty members found that he “intentionally engaged in multiple acts below minimum standards of professional integrity” and that his conduct required a “severe sanction,” the brief states.

Churchill’s attempts at reinstatement “had only a miniscule chance of success especially given (his) statements ‘demonstrating his hostility to the university’” and his filing of retaliatory complaints against investigating committee members, according to the current brief.

And let's not forget David Lane's various comments. We appear to have come full circle. At least the issues are fairly clear.
Posted by Focko Smitherman at 11:13 AM No comments:

Longish piece by Peter Huber at City Journal on Stewart (Whole Earth Catalog) Brand and his views on all things eco, as expressed in his new book, Whole Earth Discipline: An Ecopragmatist Manifesto. Penultimate graf:

Brand is a brilliant man with a precariously jumpy mind. Halfway through his book, tucked where it won’t distract any but the most careful reader, we read: “I have learned to suspect my excesses of optimism and pessimism. Apparently I often think that societies catch on faster than they do, and that large complex systems are more brittle than they are. Bear in mind that I might be that way about climate change. And many of my faulty opinions turn out to be based on ignorance; dismissing nuclear was one of them.”

Posted by Focko Smitherman at 11:37 AM No comments: