Last X-mas card of the season

You'll never guess who it was from. What? That's right! Colorado first district congresswoman Diana DeGette (D)! And it was only five weeks late! Thanks, Diana! 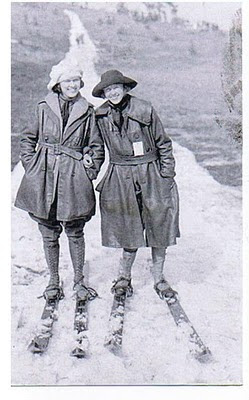 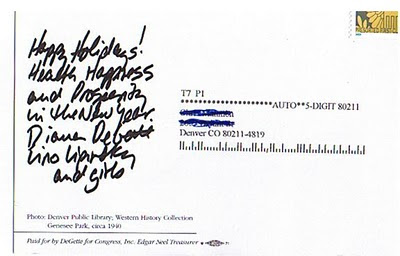 What's that last line after her sig? My guess: "Vino workday bad girls."

Update: Sheet, I just noticed the card isn't addressed to me, but to the guy who lived here 15 years ago--that is, when 'ol Pat was still in office. Thanks, Diana. Update your goddamn mailing list.

Update II: Doi, actually it was only a month late (consumer math 'R' us). Practically on time for a Dem.
Posted by Focko Smitherman at 5:02 PM No comments:

Children are to be taught about homosexuality in maths, geography and science lessons as part of a Government-backed drive to "celebrate the gay community"

Don't think the kiddies will like it. There apparently won't be any cake or balloons (there will, of course, be clowns).

Among the suggestions are:

Maths – teaching statistics through census findings about the number of homosexuals in the population, and using gay characters in scenarios for maths problems;

Science – studying animal species where the male takes a leading role in raising young, such as emperor penguins and sea horses, and staging class discussions on different family structures, including same-sex parents;

Geography – examining the transformation of San Francisco's Castro district in the 1960s from a working-class Irish area to the world's first "gay neighbourhood", and considering why homosexuals move from the countryside to cities;

The lesson plans, written by teachers and backed by the Department for Education, will be available for schools to download from the Schools Out website. . . .

The Schools Out organisation, which runs the month-long event, declares on its website that the aim is to "celebrate the lives and achievements of the LGBT community" and "encourage everyone to see diversity and cultural pluralism as positive forces".

As usual, the U.S. is a few years ahead of England in radical math (though, horribly, gays are excluded except for math about AIDS).

(via Weasel Zippers and commenter laceyunderalls at AoSHQ)
Posted by Focko Smitherman at 7:10 PM No comments:

John Glenn is still alive. For some reason I never see him in a death pool.
Posted by Focko Smitherman at 11:13 PM No comments:

Ever seen Bad Day at Black Rock? For many years we've flubbed around the house in imitation of her last scene in that movie, where she goes running to Robert Ryan (just before he shoots her daid), arms flailing, tits flooping, looking about as uncoordinated as a human can look.

The D-a-W is better at it than I am, for some reason (I'm funnier doing it, I claim). Looked for the scene, but no luck. The movie is great, though hokey, as exemplified by this scene. Karate chops to the small of the back are surprisingly effective. At least on The Borg.

Never was a big fan of Forbidden Planet, mainly because I can't stand Walter Pidgeon. (Can't stand Greer Garson either, he said irrelevantly, except Pidgeon was in the lousy Mrs. Miniver with her).

Vaguely remember Honey West. Only two things, actually: Francis's mole, and her skintight spysuit as she crawled into her secret spyvan in the intro. I was seven years old, and still: va-va-va-voom.

More irrelevance: Anybody remember Secret Sam? Little kids loved that spy stuff in the 60s.
Posted by Focko Smitherman at 12:11 PM No comments: