In its heyday, El Chapultepec welcomed music legends such as Frank Sinatra, Tony Bennett and Ella Fitzgerald, as well as visiting rock stars like Paul McCartney and Mick Jagger. Krantz's insistence on free, live, straight-ahead jazz every night of the week helped the 'Pec — as insiders affectionately call it — stand out on the corner of 20th and Market Streets.

Haven't been there in years, but back then we called it "the 'Pec, too, so I guess we were "insiders." Wonder why nobody ever told us.

Even President Bill Clinton played his tenor sax on stage there.

"I've had everyone in here but Jesus," Krantz was once quoted as saying.

No, Jesus played there once, too. Oh, wait. That was Art Blakey (scroll down a little).

The club opened in 1933, the day after Prohibition was repealed and decades before Coors Field and historic preservation turned Lower Downtown into a haven for sports bars and trendy restaurants. Krantz began bartending at El Chapultepec in 1958 and inherited it a decade later from his father-in-law Tony Romano.

"He was there just about every night," said musician Freddy Rodriguez, who met Krantz in 1979 and has been playing at El Chapultepec ever since. "He'd sit in the back all night every night. He never came and sat down front where the music was happening, but he knew what he wanted and he just loved the jazz community."

Freddy led--or I guess leads--the house band there. A friend of mine who sat in with them a time or two always called the band, "Freddy and the Plastic-hairs." No idea why.

Krantz's love of jazz and hard-nosed approach to running the bar earned both a loyal audience and the respect of countless musicians — as well a national reputation rich in dive-bar lore. One story says Krantz won the bar in a poker game. Another tells of him knocking an unruly patron's teeth out with a pool cue.

Dive-bar lore: One time (and only one time) I stopped by El Chapultepec in the afternoon. There were three customers, including me, at the bar, and that was it. The guy on my right had his head comfortably ensconced in one of those red plastic bowls of stale popcorn Jerry was so generous with. The guy on my left, while equally passed out, had managed to remain upright on his stool. This simalcrum of consciousness was somewhat marred, unfortunately, by the foot-long hunk of iridescently green snot hanging out of his nose.

One of the few times the D-blog has ever lent sparkle to a gathering.

In piece [sic] for Esquire magazine, long-time Denver-based writer J.R. Moehringer called Krantz cranky and charismatic, a "full-blooded Russian" who didn't take any guff from customers and handled his business brusquely and efficiently.

Cranky, si. Brusque, certainly. Charismatic, not so much.

It's just a tiny place; I doubt you could legally stuff 75 people in there--though there was often double that on good nights. I'll let the guy with the discerning nose have his way on what the place smelled like. The fact remains that the 'Pec (see, insider!) was one of the main reasons the D-blog could confidently say: Denver: Not a cowtown.

"His big thing is that he always wanted it to be for everybody," said Krantz's daughter Anna Diaz. "At the time when he started it you'd get dressed up to go to the symphony, and there were people who had never even seen live music. So there was no cover charge, no dress code. The bums on the street were just as welcome to come and listen as the millionaires." . . .

There was, I believe, a two-drink minimum, though. Bums hardest hit.

Posted by Focko Smitherman at 6:26 AM No comments:

In this Gamera story on next week's hearing of oral arguments before the Colorado Supreme Court in Ward Churchill's case. But at least an actual daily newspaper finally noticed.
Posted by Focko Smitherman at 5:51 PM No comments:

Meant to go, I swear

To the Service Employees International Union rally in downtown Denver today. The Post covered it, and the D-blog would have too, if he hadn't forgotten about it.
Thank God he did though, for the Post contains this horrifying paragraph toward the end of the story:
"Following the rally, they [presumably the rallyers or whatever] performed a flash mob dance on Broadway."
Cost what little's left of the D-blog's life to have even watched such a thing. And just to be pick-nitty, doesn't a flash mob have to be gathered spontaneously by a "flash" to potential mobsters over your various electronic communication devices? I mean, they were already there, so how can it be a flash mob? Huh? Huh?
Update: The Post has a slideshew. No flash-mob dancing.
Update II: There are surprisingly few pics of the June Taylor Dancers out there.
Posted by Focko Smitherman at 5:41 AM No comments: 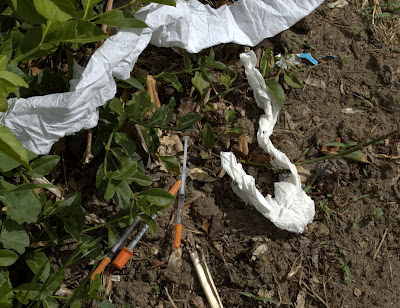 Found this tableau in the corner hunk of the front easement. 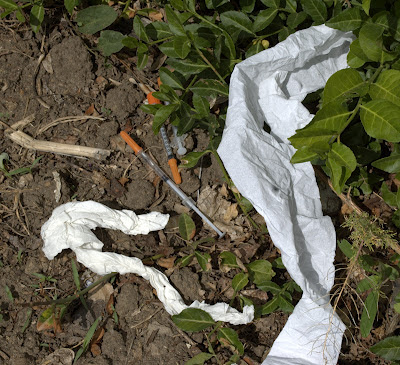 At least the little horticulturalists replaced the caps on the things. Urban gardeners are always considerate!
Posted by Focko Smitherman at 6:29 AM No comments: 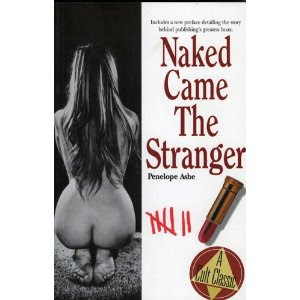 She's probably close to 70 years young by now.
Posted by Focko Smitherman at 11:43 AM No comments:

Hey kids! What day is it? That's right! It's 'Blog about Brett Kimberlin' Day!

Since I don't think I'd ever heard of the dangerous jerk before yesterday, I'll just link to the first page of all the folks who are defending their and others' First Amendment right to speak the truth about the unrepentant domestic terrorist (hey, that phrase rings a bell).
Update: Here's Patterico's long, detailed post about the harassment and threats he, his wife and many others have been subjected to by Kimberlin and his minions. Though what Patterico's gone through is so much worse it constitutes a difference in kind not degree, it reminds me a little of the shit Ward Churchill, Benjie Whitmer and their pals pulled trying to intimidate me during the Wart brouhaha: publicizing my wife's ancient DUI in an effort to get her fired, accusing me of all manner of defugalties including panty-sniffing and window-peeping in Boulder County (which Wart claimed he found in official records), etc. Oh, and the threats of severe bodily harm and/or death. Can't forget those.
Posted by Focko Smitherman at 5:29 AM No comments:

Pretty much all that's left of Occupy!Denver: 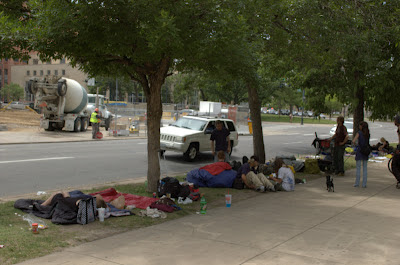 A quarter-block of tarps and sleeping bags along 14th Avenue. 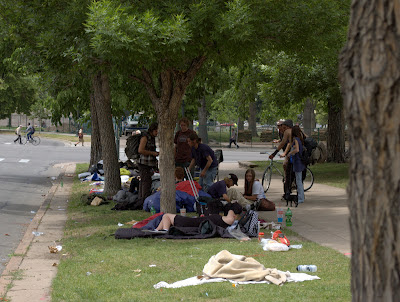 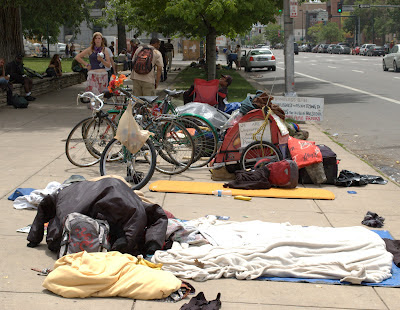 And another little hunk along Broadway.

That's it. No tents. 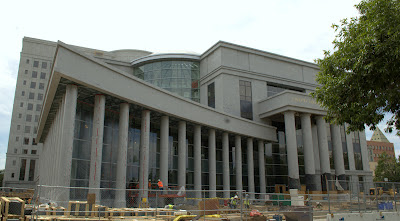 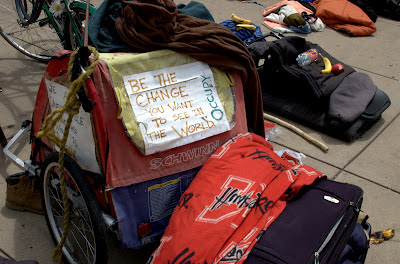 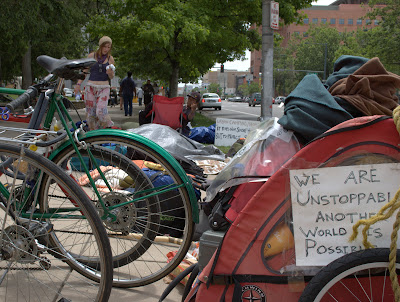 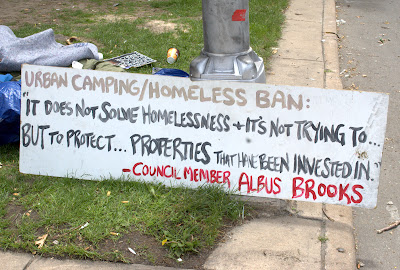 One supposes this is meant as a searing indictment. 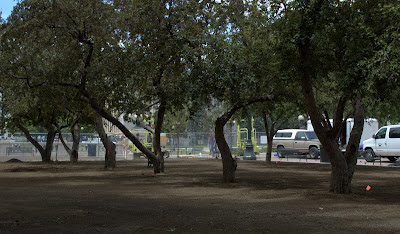 Workers have torn out all the old sod at Civic Center, but you can still see where occupod tents were pitched under the trees. It's almost like those sidewalk shadows of people on the streets of Hiroshima after The Bomb was dropped. 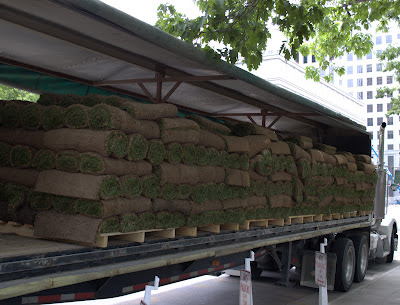 In a fine example of the circle of life, however, bodies of occupods were efficiently converted into sod to replant the park. 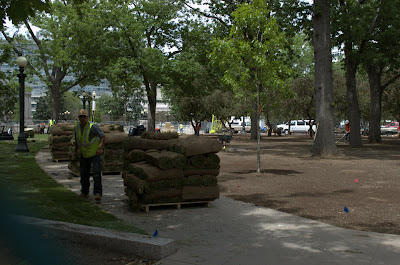 Update: The recently enacted Denver "camping" ban, by the way, takes effect next Tuesday. It's very compassionate.
Posted by Focko Smitherman at 4:05 PM No comments:

June 7, 1:00 p.m., somewhere on the first floor of the City and County Building, according to the mustachioed spinsters at the Ward Churchill Solidarity Network, which also has Ward's brief, CU's reply, and Wart's reply to the reply.

Update: Oddly, maybe, neither the Post nor the Gamera has mentioned it.
Posted by Focko Smitherman at 5:06 PM No comments:

Somehow in trying to find out when the annular solar eclipse would begin in Denver on May 20 I ended up at a piece in Huffpo-Denver, which provided interesting facts and figures, but ended like this:

One of the most fun viewing spots on Sunday will likely be Folsom Field at CU-Boulder, where the university is hosting a free eclipse-watching party from 5:30 p.m. until sunset. University officials are expecting 10,000 - 15,000 viewers in attendance, The Denver Post reports.

The Denver Museum of Nature and Science is also hosting a free viewing party in City Park from 6 p.m. to sunset and will have solar telescopes available, but if you want to observe the eclipse away from the crowds, try one of these beautiful spots:

And that was the end of the story.