A 52-year-old golfer went into anaphylactic shock today after a rattlesnake bit him twice on the ankle at The Meadows Golf Course in Jefferson County.

Witnesses told authorities the victim was on the course’s sixth hole and off the green looking for his golf ball in ankle-deep grass, the spokeswoman said. As he searched for his ball the snake bit him. Snakes will attack if they feel they might be stepped on. . . .

I blame global warming. No, really. Here's a Diamondback rattler sunning him(?)self about six feet from my tent on the Verde River, 20 miles north of the little desert town of Dry Hump, Arizona: 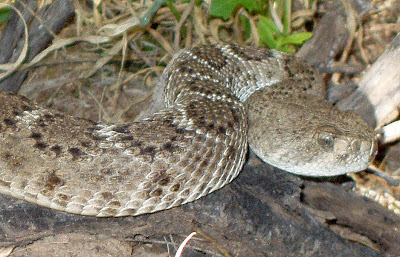 Nobody was playing golf. We just sat there. I drank coffee.

"They’re coming out there to sun themselves," [an official of some sort by the name of] Trost said of the rattlers. "We’re coming across them and thinking they won’t be in the middle of a golf course or in the middle of a subdivision. They’re out on the roads, in the golf course, on the rocks, and we’ve had several calls in the last two months of people coming across them."

The guy was in serious condition, but it sounded like he'd be okay. So, one more from the Verde: 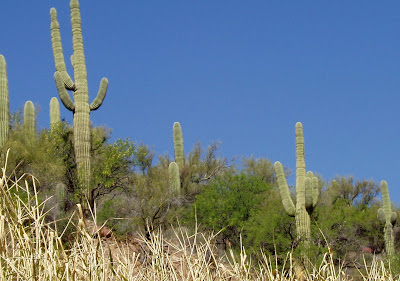 Ten feet from the river it's so dry Saguaro cactus thrives.

Saguaro cactus. This calls for another Gunsmoke! How about the episode titled, strangely, "Hinka Do" (10 October 1952).
Posted by Focko Smitherman at 10:41 PM