Wait, wrong long-running sitcom. This sitcom was the start of the regents' meeting to decide whether to fire Ward Churchill, and it was wild and woolly, not to say a leetle dangerous for your friendly neighborhood Drunkablog. 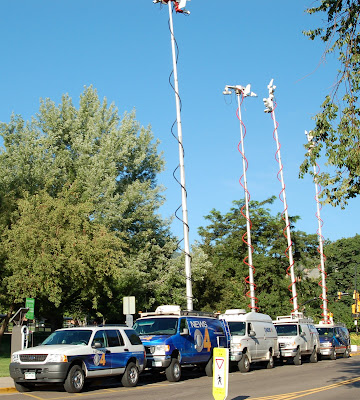 Lots of media, of course. 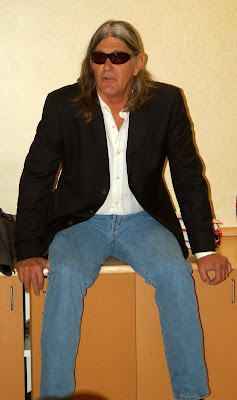 Wart showed up punctually, a little before 8:00, I think. I gave him the high sign, as I'd promised to do over at Try-Works. He saw it. 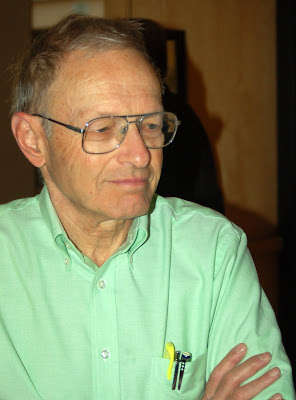 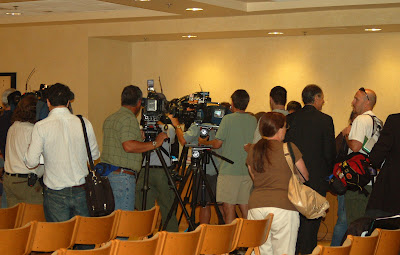 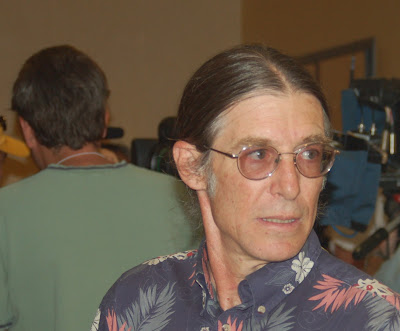 CU student advisor and Churchill supporter Ken Bonetti. I asked him when the DVD of Churchillpalooza was coming out, and he said that while no one had asked for it, he could probably rustle me up a copy. Heh. He also witnessed the threat on my life (see below). 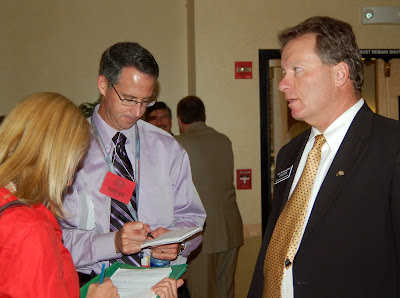 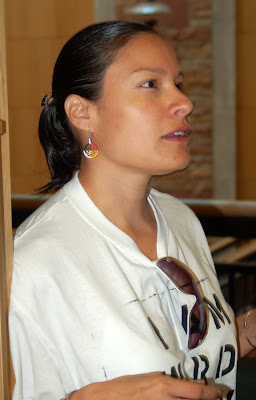 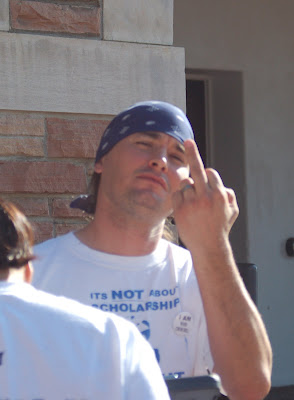 In front of about 30 people, many of them with cameras and tape recorders, former AIM leadership council member Dillabaugh (who said he'd been in jail and didn't care if he had to go back) threatened to "fuckin' kill" me. PB and Drunkablog friend Laurie was right there, as was Ken Bonetti, who said something like "now, none of that."

Dillabaugh also followed me around while I was taking pictures, saying I'd been harassing his wife and threatening to "kick my ass." He said it roughly half a dozen times, so somebody had to get it on tape. (The first time he threatened me, by the way, some guy came over and stationed himself on my other side, ready to help Dillabaugh out. I was wearing a video camera, a still camera, and a backpack, with two guys just itching to punch me in the head.)

Oh yeah, there was at least one other witness to Dillabaugh's threats: 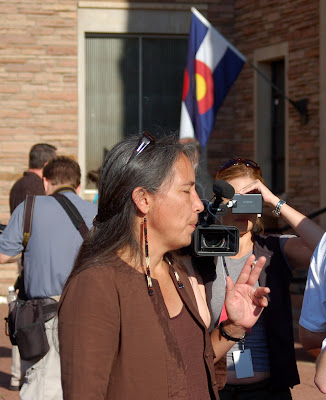 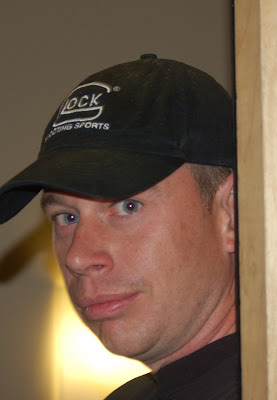 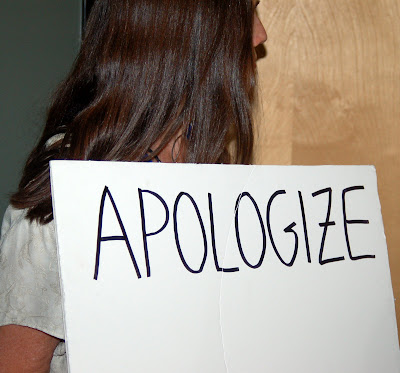 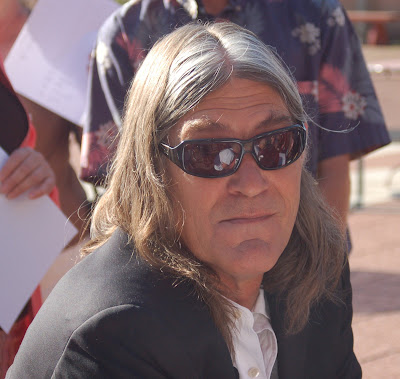 Churchill had time to go outside for four or seven cigarettes before the meeting started. Here he'd just greeted me with "Hey, John! Molested any kids lately?" Darn, maybe he really is Charley Arthur.

Okay, enough for now. I'm going back for the afternoon session, which promises more excitement. This time I'll remember my tape recorder. Listen Drunkablog fans, if any, don't forget who threatened me. These people are capable of any cowardly act--or, more accurately, capable of getting others to do any cowardly act.

Update: Reporters outnumbered vigil-keepers, or whatever they called themselves. I talked to two of them, one from the News, one from the Post. Don't know if I'll make the cut with either one. Laurie got a nice three or four-minute standup for (I guess) a RMN vlog. I'd have been nervous, but she just said what she had to say. Wonder if it's up yet.

Update III: Journalists! If you would know Ward Churchill, you must know Try-Works (read the comments for the last month as well, at least, if you care about doing an accurate story). Westword's Michael Roberts also wrote a much-too-nice account of CU instructor Ben Whitmer and his nasty little blog here.

Update IV: I probably should explain what Churchill meant by asking if I'd molested any kids (lately). First, one of Try-Works' (and therefore Ward's) pet accusations against their enemies has always been pedophilia. Besides me, they've accused Pirate Ballerina's Jim Paine and Rocky Mountain News editorial page editor Vince Carroll of that particular crime--on absolutely no evidence, it goes without saying but I'll say it anyway.

More recently, the Try-Works' Ann-erika White Bird ran a criminal background check on me. Coming up empty, she ran one on my wife, Susan, who has nothing to do with the Churchill case but who, five years ago, got a DUI. White Bird plastered this information all over the blog--anonymously (she thought), of course.

When THAT didn't have the desired intimidating effect (I mean, five years ago? Even the insurance companies don't care anymore, and Susan hasn't had a drink since), the Try-Works' Charley Arthur (Ward Churchill) added the piquant accusation that I had a lengthy but for some reason sealed history of window-peeping and panty-stealing in Boulder County.