All kinds of verbiage about the Churchill case, as PB (from whom I shall gleefully steal while changing his wording only slightly) notes.

The Hankster unburdens himself in the Wall Street Journal: "Why I fired Ward Churchill". Money quote:

Controversy -- especially self-sought controversy -- doesn't immunize a faculty member from adhering to professional standards. If you are a responsible faculty member, you don't falsify research, you don't plagiarize the work of others, you don't fabricate historical events and you don't thumb your nose at the standards of the profession. More than 20 of Mr. Churchill's faculty peers from Colorado and other universities found that he committed those acts. That's what got him fired.

Commentulation at Inside Higher Ned continues.

I agree with Churchill's dog Benjie: Mike Littwin is a nitwit:

Or maybe they should have just handed him over to Caplis and/or Silverman, who were both on hand. . . .

Please restrain your guffaws at these mighty sallies of wit. There's more:

And yet, I was still stunned that one regent, Cindy Carlisle, refused to go along with the pack. This is your basic profile in courage. It's also a major upset.

This a story [sic] of media frenzy and how Churchill's "Little Eichmanns" 9/11 essay- rediscovered more than three years after he wrote it - became a test of dissent in wartime, a war that many people have changed their minds on.

Non-sequitur--three of 'em, in fact.

I'm guessing [Carlisle] saw something that everyone should have seen: that as much as CU wanted to make this about academic misconduct, everyone knows why we were all here. Churchill didn't become a Bill O'Reilly staple because he was a plagiarist or because of what he might have said about Capt. John Smith or blood quantum or smallpox.

And as a bonus, it became a story about the left-leaning academia that O'Reilly and the gang are always ready to demonize. And if it was a test, we lost, just as CU has lost.

Not about plagiarism. O'Reilly and the gang. You see how clueless Littwin is about who and what have been driving this story? And who exactly does he mean by "we"? From my point of view, "we" won, Big F. Time, Jr.

Littwin, by the way, was right there the whole time Dimbulb Dillabaugh was threatening to kill and/or maim me. Nothing in his story about that. Three possible explanations:

1. Littwin is (very) hard of hearing;

3. Littwin knows who I am and doesn't like me because I've picked on him (picture fourth from bottom).

My answer: 2 and 3. Whatever the case, Littwin just sat there, head down, sending out huge "don't bug me" vibes even when it was only him, Laurie, his assistant or whatever she was and me still outside. Lazy, spiteful, chicken and unthinkingly liberal--that's Littwin. 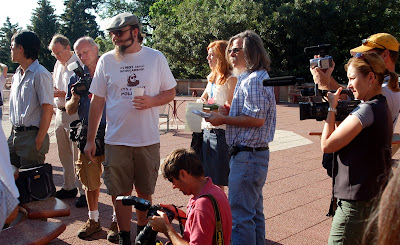 Dipshit Dillabaugh was about six inches away, threatening, when I took this pic. Littwin's the long-hair. [Update: As noted yesterday, the big guy in the white shirt was pictorially featured at LGF yesterday. He does not fare well in comments. In fact, somebody calls that complicated beard of his a "cock target." As also noted yesterday: heh.

Update: Got off on a small tangent, didn't we? Littwin. I spit me of him, as P.G. Wodehouse once said.

Anyway, PB also links to an idiotic piece at "Media With [it says here] Conscience" by some gink going under the name Rosemarie Jackowski. He's already taken the best quotes, like this:

Churchill is not alone in his current circumstance. His name will go down in history along with Galileo and others who have dared to challenge the conventional view. Now the trial of the century is about to begin. It has been more than 300 years since the Salem Witch Trials and more than 80 years since the Scopes Trial.

So I'll just quote her opening:

This is not the first time in history that mob rule has taken the place of intelligent reflection. The earth is flat; the sun revolves around the earth; 9/11 occurred because they hate us for our freedoms. Those who disagree will be charged with Heresy! A modern day Inquisition has been in process. Professor Ward Churchill has been fired.