The Man-like Object (h/t stumpy) says we're running out of time even quicker than we thought:

Former Vice President Al Gore said Wednesday that climate change is a "planetary emergency" and that many scientists believe there may be less than 10 years to moderate warming's destructive effects.

"There's an African proverb that says if you want to go quick, go alone," said Gore, speaking at the Aspen Institute's Greentech Innovation Network summit. "If you want to go far, go together. We have to go far quickly."

"These are not political problems," he said. "They are moral imperatives." 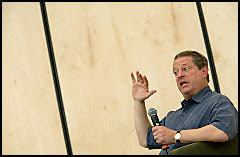 Sometimes you eat the b'ar . . . : "Former Vice President Al Gore speaks about global warming at the Aspen Institute's Greentech Innovation Network summit. 'If this was a football field, we would be fighting between the second and third yard lines right now, and the crisis is winning.'"

Posted by Focko Smitherman at 12:48 PM