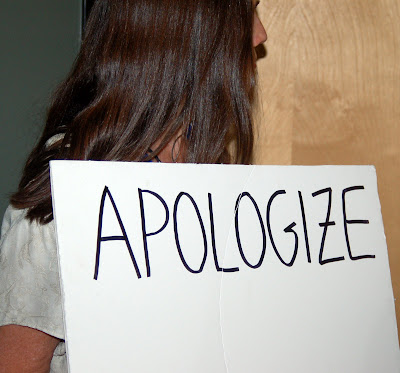 I worried that she meant me.

But she finally figured out who she actually did mean: 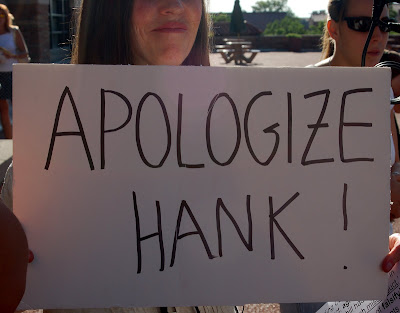 Whew. I've seen this chick floating around at other Churchill events. She seems quite insane. 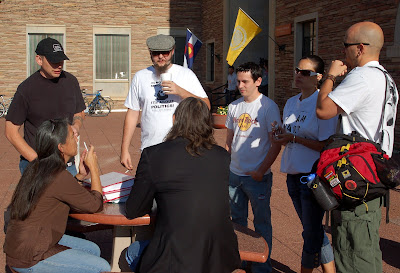 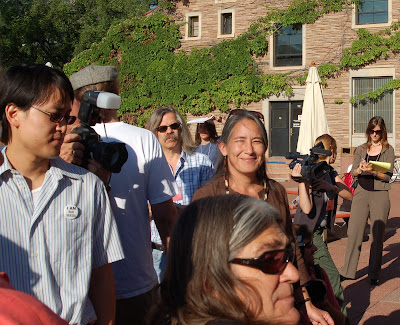 At this point Josh R. Dillabaugh is still following me around threateningly, which is why Nutso is smirking. Daniel Kim, organizer of the disastrous Churchillpalooza, stands left. And who's that other long-haired man in the sunglasses back there? 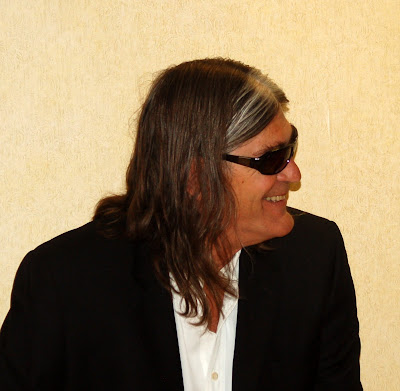 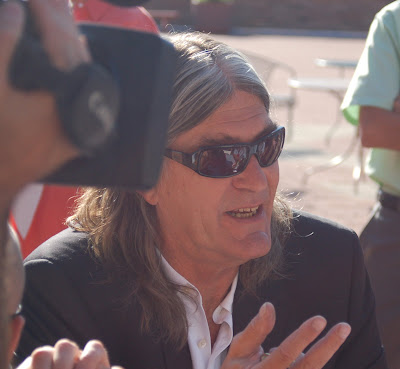 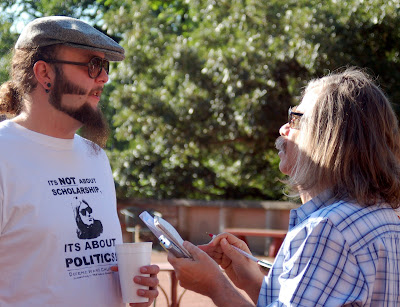 Update: Laurie, who accompanied me to the regents' sessions, describes what she saw that morning in comments over at Try-Works. She begins by quoting from one of Ben Whitmer's crazed fulminations about me (he's obsessed, I'm telling you):

“In fact, the way he [your darling Drunkablog] was stalking [Ann-erika White Bird], we all began to wonder when he would drop his grubby trousers and start to rubbing his dick on her leg. That is, until her husband suggested warmly that Mr. Martin might want to quit fucking with his wife…”


Seems the only thing you know less about than baseball (Benjie had betrayed another of his myriad cluelessnesses) is what was going on at the Firing Day gathering. I can see why you got it wrong though. Either you never see 8:00 AM or you were nursing one hell of a hangover. Seriously, Benjamin, you looked terrible for a guy who was supposed to be so happy!
The fact is that the only girl John was following around was Ward Churchill. It was Josh who followed John, trying to block him from taking pictures of Ward, not his wife. She had not been, at any time, anywhere near us. Sadly, no matter what he was saying, Josh made it clear he was more interested in Ward Churchill than his wife!
Josh placed his entire body about 4 inches away from John and leaned in from his waist up while he held his hand in front of John’s camera. I mentioned my surprise at his attempts to interfere with John’s right to take pictures of Ward, as everyone else was doing at the time. Then the threats began. I witnessed him make death threats to John, repeatedly. Ken Bonetti turned around and saw what was going on and made a discouraging comment to Josh on the order of “none of that!”. Then I heard Josh say he had been in jail and wouldn’t mind going again. For a good 10 minutes he shadowed John and looked intimidating as his baby-face would allow. I spoke with security and they were watching. I was called away for a media interview. During the filming, someone walked by me and said “You’re dead!” I’m not sure who that was, but I know he will be visible on the tape. . . .

As I said over at Try-Works, evil and stupid, just like the rest of them. Always a winning combination.
Posted by Focko Smitherman at 3:58 PM