First, for all kinds of good Churchill stuff go to PB and Slapstick Politics.

Laurie, SP's El Presidente and I got together for part 2, the vote, in the Glenn Miller Ballroom. Lots of waiting, lots of wandering around taking pics. Yes, Ward was lunking about with his big sticks. When he came in and saw me taking (yet another) pic of him he said, "get my good side, John." Displaying that flashing wit so many have noted I said, "There ain't one, sorry."

Notice the clever use of "ain't" to mimic Ward's own writing style as Charley Arthur?

We waited something like an hour and a half. Then the regents came in, voted, and left. Boos and cursing. No open mike. As we were leaving, Glenn Morris, the Harvard-educated lawyer, CU Denver professor and Churchill supporter, walked by us. I said, "Hi, Glenn!" in my usual cheery tone. His reply: "You'll be getting it."

Nice. Another goddamn threat against the personage of the Drunkablog. Morris didn't tarry to explain what "it" might be, probably because he was in a hurry to play drums with Wart: 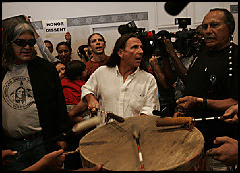 The Rocky's pic. Morris is center, Russell Means on the right.

Here's a pic I the stern but kindly El Presidente took moments after the vote: 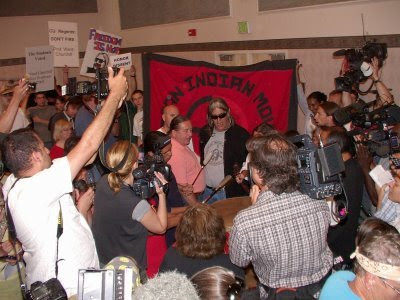 They had the banner, the drums, all that crap, ready to go. [Update: ordinary American citizens like us couldn't even bring in our camera cases.] 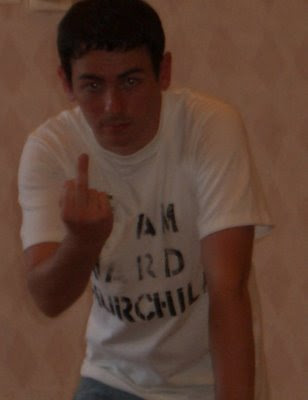 And a pic that turned out kind of cool, if only because I didn't know how to use the camera. Don't know the goof, either: just another member of Churchill's Dune Buggy Attack Battalion.

I didn't know how to use the camera because it wasn't mine. No, mine was home, where I'd left it like an idiot. Me, not the camera. Is the idiot.

Luckily, El Presidente, as all good dictators should, had a spare. Forward into the socialist dawn! 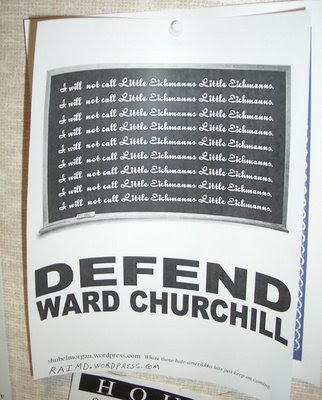 Update II: Glenn Morris and I have a little history.

Update III: Despite all the threats and off-flippings, it was a good day.
Posted by Focko Smitherman at 9:21 PM