Denver rally and march "for Lebanon"

Managed to work up a simalcrum of consciousness early enough to make it down to the rally in support, supposedly, of Lebanon at the City and County Building this morning. Of course, being an International ANSWER joint (co-sponsored by a Palestinian organization called, strangely, Frontpage), the rally was really all about denouncing everybody's favorite "entity."

So, Zombie-like, I took pictures. 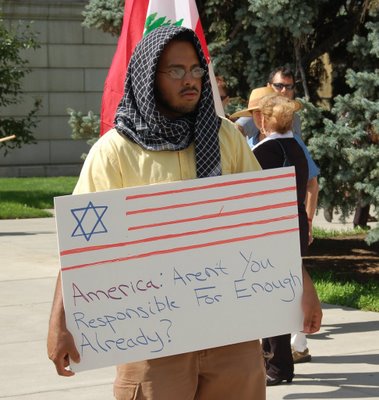 The rally started at 10:30, but people began showing up a half hour before that. 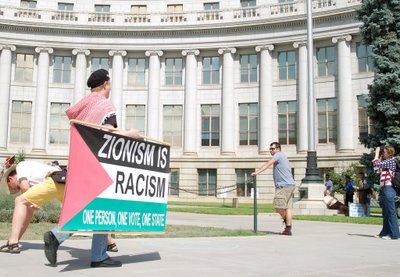 Because everybody knows: The early bird catches the Jew! 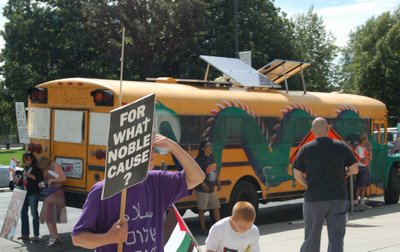 I think the anarchoids came in this bus. Kinda cool paint job. 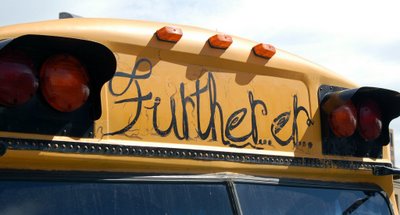 A lone counterprotester. His sign says "Hezbollah killed U.S. Marines." He drew a crowd as soon as he showed up, which in turn drew five or six Denver cops. 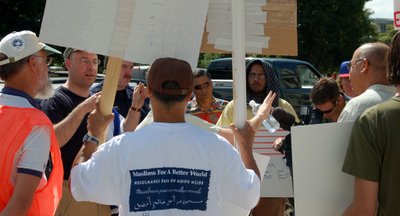 A vigorous discussion, but no fisticuffs. 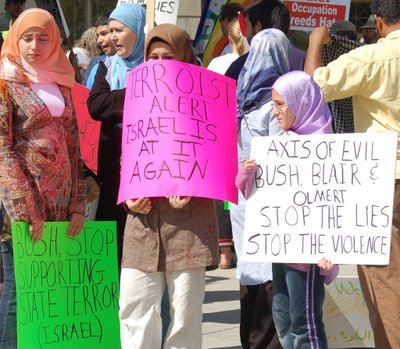 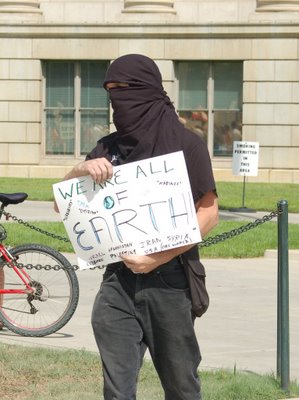 Speak for yourself, freak: As we've had occasion to observe before, it's not a real moonbat protest without the Bandanna People. (The other side of this guy's sign, by the way, says much less benignly: "Bring the insurgency home.") 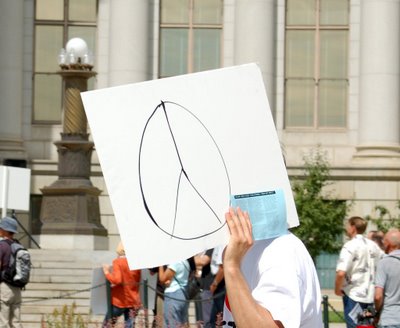 Didn't somebody point out just recently how difficult it is for certain people to make a simple peace sign?

The first speaker was bloody Glenn Morris--formerly co-director, with Ward Churchill, of Colorado AIM. He didn't say anything unexpected: "This is a war of empire"; "Indians are the Palestinians of North America, Palestinians are the Indians of the Middle East"; "Columbus--the first imperialist"; &etc. 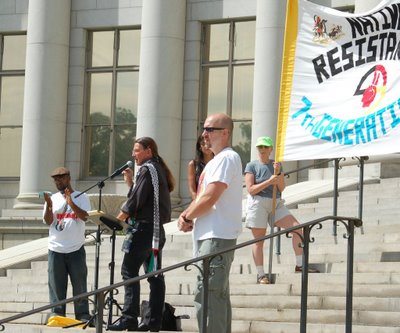 The AIMers unfurled that big sign (much bigger than anything the Hezbollocks had) saying "Native Resistance, 7th Generation" right in the middle of all the Palestine- and Lebanon-supporting signs. Way to steal the show, Glenn. But yes, Glenn wore a kaffiyah, so I guess it was cool.

The other speaker was a local Muslim who didn't say anything interesting or I fell into a syncope or something. Oh yeah, he did mention that Israel was in the process of bombing Lebanon "back to the Stone Age."

Then we marched downtown. 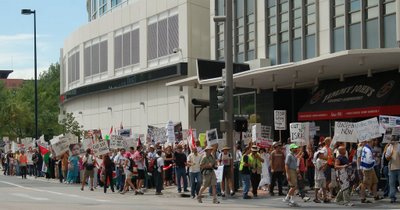 There were maybe 1000 people all told, the majority, of course, white progressive types. But they all joined in on the chants of Long live Hesbollah! Long live Nasrallah! Long live Palestine! 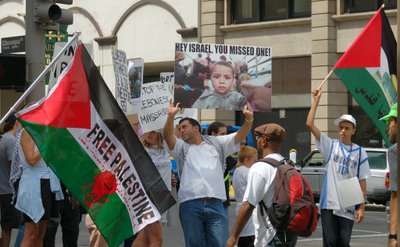 They did some acting out along the way too. 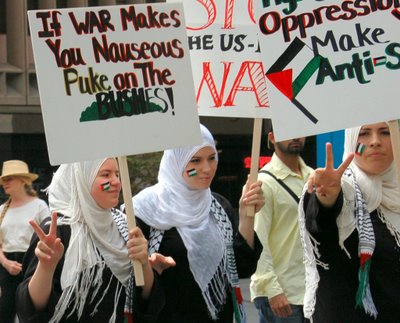 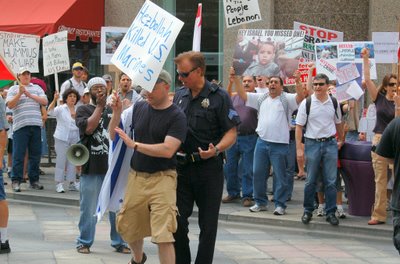 The lone counterprotester again. The cop was telling him he was gonna run him in if he didn't get out of people's faces. The protesters clapped and cheered.

Wish I'd talked to the guy, but he was always either surrounded by cops and/or protesters or he was way up front somewhere.

The march ended charmingly in front of a Jewish or Israeli cultural center on California Street. This guy was waiting there, rather than walking down the mall with everybody else: 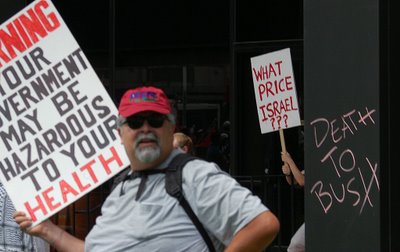 I don't think the government is the most immediate threat to your health there, Pork Rind. 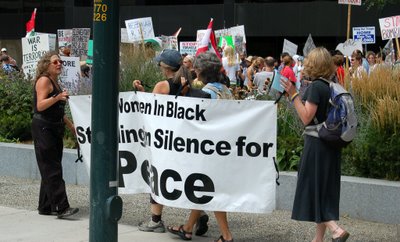 Gabbing away: Women in Black Standing in Silence for Peace.

Billy Bob was very good, nipping at just the one hippie. But he was just as tired as I was: 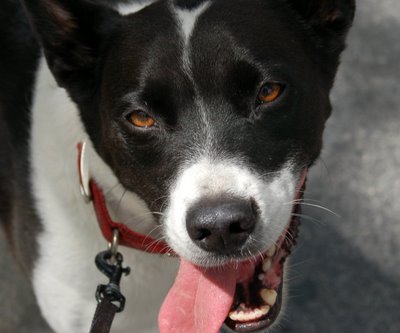 It was pretty hot out.

Update: "Hezbollocks" isn't my coinage, but I don't remember whose it actually is.

Update II: Didn't realize this rally was part of a national thing, or that Zombie would be posting too--his or her pictures from the San Francisco protest are much nastier than mine, and make me feel like I've treated this altogether too lightheartedly (via LGF).

Update III: The Post's sickly sweet day-after piece (look at the pic); the News doesn't seem to have run anything.
Posted by Focko Smitherman at 1:14 PM