More than 700 people gathered in Denver's Civic Center Park today as part of the national "4/20" rally to protest laws against marijuana.

"It's a weed smoking festival," said Joe Smith, 18, who recently moved to Denver from Nevada. "I believe in the medicinal benefits of marijuana."

Good for you, Joe. Now quit talking to that tree.

"Everyone came together to smoke marijuana and chill," said G.K. Hoovers, 20, of Aurora. "It's been cool. There were no problems."

The rally also drew about 100 Denver Police, including the SWAT team, the mounted patrol, undercover members of the vice and narcotics bureau, the gang unit and other departments, said police spokeswoman Virginia Quinones.

"Even though marijuana smoking isn't illegal in Denver, it's still illegal in Colorado," she said. Officers contacted people who were openly smoking marijuana and checked identification, said Quinones. Those with outstanding warrants for other crimes were arrested and the rest were given citations for possession and public consumption of marijuana. She said the number of arrests and citations wouldn't be available until later tonight.

The crowd, many wearing leis of fabric marijuana leaves, was friendly and light-hearted.

"I came on vacation to Denver for this," said Francine Popovich, 18, of Sedona, Ariz. "All of my friends at home are so jealous. Look how many people showed up. It's shows how many people want marijuana legalized."

It's does? Hard to believe Francine came from Sedona to smoke pot in Denver.

Some visitors to Denver wandered into the gathering by mistake, including Jim and Kathy Arthur of Iowa, who walked toward downtown after seeing the Art Museum. "It's our generation that started all of this," she said.

"We're just beer drinkers," he said. "It certainly adds to our adventure."

Sure looks like more fun than the kind of protests I go to. Then again, a gathering of methheads in withdrawal would be more fun (and draw a bigger crowd) than a protest in support of Ward Churchill.

Update: CU students agree! The crowd was in the thousands and the cops were much nicer at the 4/20 celebration on the Norlin Quad. 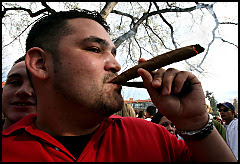 Posted by Focko Smitherman at 8:59 PM