Running late, so I didn't get to the first event of Churchillpalooza, the March on the Regents, until a little after its noon start time. But I had to look at my watch to make sure I wasn't severely early when I saw the "crowd": 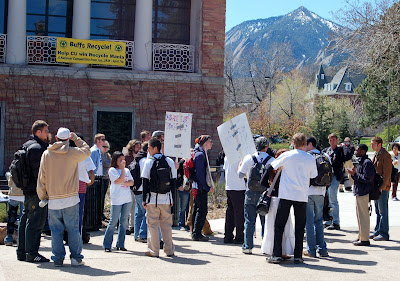 Perfect day for a march--cool and sunny--but apparently few were interested, including, once I got there, me. A couple of signs: 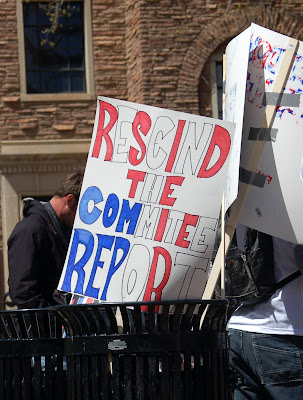 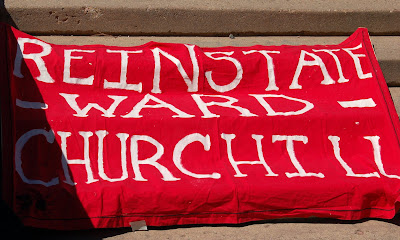 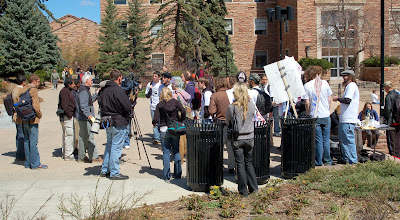 Another "crowd" shot. All the people to the left (physically) were meeja types. 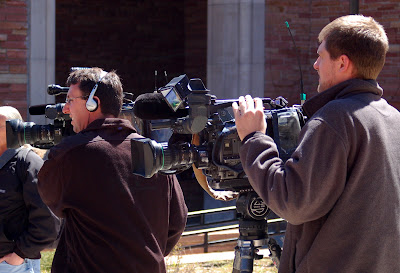 Now I'll have to watch the local news tonight, something I usually avoid like the plague (or like smallpox, for that matter). 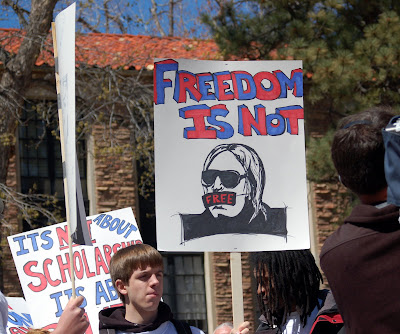 The dream of millions, graphically rendered. 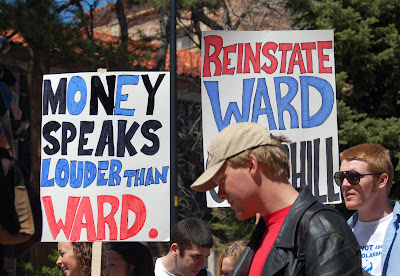 Wonder how much Ward has made from speaking engagements this year? 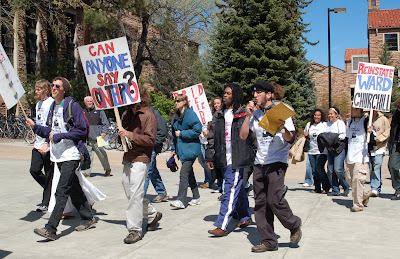 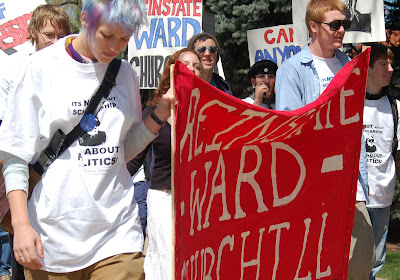 Tried to get a couple of those low-level shots the MSM specializes in that make a few goofs look like a mighty army, but there weren't enough people even for that.

The media types were trying, too. I saw one of them place his big video camera on the ground to capture the protesters' implacably marching footsies, so I did the same: 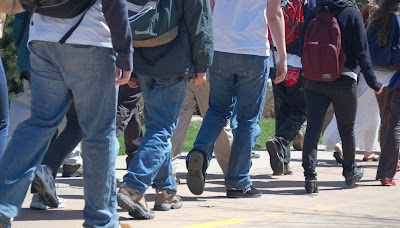 Think Natsu ever says that? (Answer: No.)

The guy with the bullhorn claimed the petition they were delivering to the Regents had--get ready--461 signatures. CU, of course, has a student population of around 30,000. I know I already used the word, but: pathetic.

At least the chalk artists near the fountain were decent: 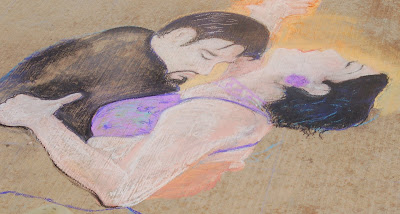 But only decent. Why's he squishing her guts out? She's hurtin', obviously, but does he care? No. He just wants to stare down her dress. Maybe squishing her makes her ta-ta's look bigger.

Oh yeah! I also got another groovy t-shirt! 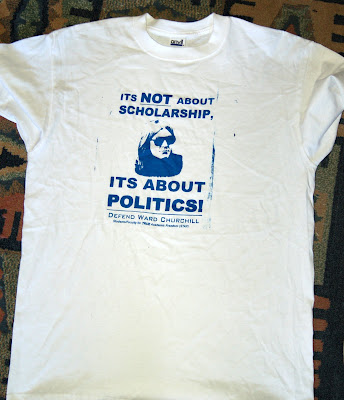 Had work to do, so didn't follow all the way to the Regents Building, which probably means I missed all the exciting stuff.

Update: I'm employing a Reaganesque strategy here by always taking their t-shirts. If I keep doing it, they'll ruin their economy trying to keep up with demand. Bwahahaha--well, time for my nap.

Update III: Compare the Rocky's account with the D-blog's:

BOULDER — Controversial ethnic studies Professor Ward Churchill should be reinstated because his ouster was all about politics, not scholarship, two dozen University of Colorado said at a rally today.

Two dozen University of Colorado? Okey-dokey. Good thing I didn't lie, though. I was thinking of saying that only two people showed up--me and Ward--and, as it turned out, I'd have almost certainly been caught.

On the other hand, the Rocky reporter says only two dozen, so he must have done his count at the end, after a few protesters expired in the ditches along the bike path during the Long March to the Regents Building.

Th[e P&T] committee is expected to issue a report any day now. CU and Churchill both will have 10 days to file legal responses to the report, then it will be delivered to President Hank Brown for final action.

That's funny. "We've been waiting" for the report too! Forward for socialism:

"The only complaints are politically motivated," said Aaron Smith, a CU senior ethnic studies major. "We're not going to stand idly by and let them fire one of CU's most distinguished professors."

Who we talking about, again?

The students presented petitions with 483 names to the office of CU-Boulder Chancellor Bud Peterson, but spokesman Bronson Hilliard said the matter is being handled by President Brown's office.

Honest, before the rally became a march Bronson Hilliard (Bronson Hilliard?) said four hundred and sixty-one signatures. Damn Bronson Hilliard for a knave. Now watch Ben Whitmer try to say I'm lying about how many showed. (Of course, you can't believe the Rocky, either: did you know they used a geneaology of Churchill that was put together by two bloggers and a New Jersey cop?) The Saga continues:

Update IV: Yes, I know Starsky and Hutch put together (Starsky + Hunch) are only two heroes, but how many three-man hero teams can you think of? That's right, none. I even thought of using the Dukes of Hazzard because they had Daisy Mae or whatever her name was, but a New Jersey cop would fly out to Denver and injure my liver if I made him out to be Daisy Mae-like.

Update V: A friend once called them Stinsky and Crotch.

Update VI: Ben Whitmer, by the way, was not in attendance.
Posted by Focko Smitherman at 3:55 PM