During the Emergencia! Foro! Nacional! Saturday, organizer Ken Bonetti told me there were no (accredited) media people covering the event (though I'm sure I saw one; she was right in front of me with her laptop running) because of the information blackout imposed by the usual corporate-governmental powers-that-be (I'm paraphrasing, of course).

Naturally I scoffed (ha-ha!) at Bonetti's charge. Now I'm not so sure. None of the three dailies (the Rocky, Post and Boulder Daily Camera) has said a word about the forum. And remember how hopefully they turned out for the Churchill rally?

No, I think there was a blackout. The F!E!N! (and, of course, Churchillpalooza as a whole) was a disaster of such monumental (or rather, minuscule) proportions, was so unspinnable as anything but, that the papers feared the wrath of the Defend Critical Thinking crowd and the CU professoriate (to commit a Sowell-ecism) if they printed the truth. Best alternative? Say nothing!

Update: And now I shall take artwork from Peter Kirstein's blog--and provide no link! Bwah--I'm so tired: 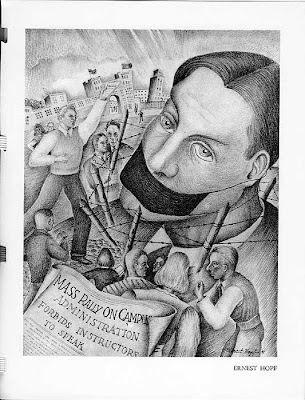 Update: No idea why pictures are disappearing again. Out, damn'd Blogspot! out, I say!

Update II: Here's what Ernest Hopf (whose drawing Kirstein borrows without acknowledgement) was actually drawing about. Fascinating.
Posted by Focko Smitherman at 2:22 PM