Noam Chomsky was on Michael Medved's

program today. Couldn't listen to much of it, but Chimsky hasn't said anything original in 40 years, so it's not like I missed breaking news.

The part I heard was funny, though. C.H.O.M.P.S. had gone off on a two-minutes-Reagan-hate that included the wonderful line, "After he left office there was a concerted effort to turn Reagan into a divinity--one of the most disgusting events in American history . . ." and right away Medved offered him one of the Reagan posters he gives away to callers.

(Chomsky probably meant when Reagan died, by the way, not when he left office, but whatever.)

Sort of O/T: My father-in-law gives money to dominionist Christer types and Rethuglicans and in return gets (besides heaven and lucrative defense contracts) calendars. A couple American Vistas (barns at sunset, happy bustling city streets, the Grand Canyon), maybe a historical themer--Washington at Valley Forge, Lincoln at Gettysburg, The Arizona burning at Pearl Harbor--and a score that feature Ronald Reagan.

The one I got last year (fascist that he is, pa-in-law forces them on his family) was a beaut: black and white publicity shots from Reagan's acting days printed on glossy oversized stock--Reagan in front of a lifeguard tower, with his mom, dressed as a fireman and posed on the Dixon (IL) fire truck (surely there was only one), and with Nancy. Lots with Nancy.

I still can't warm to Nancy. In these photos she looks like a devil doll from an episode of Twilight Zone--one moment squealing "Hi! I'm Nancy!" the next gnawing on your leg or trying to cut your throat with the safety scissors.

But Chomsky's right: it's only what the media taught me. Did you know Reagan said that homosexuals deserved to die of AIDS? 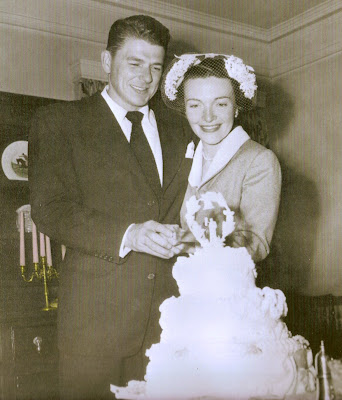 Give me the knife, Mommy.
Posted by Focko Smitherman at 4:09 PM