Niece Katie is in the second year of this hot-shit master's degree program called the Bread Loaf School of English. It's named after a mountain in Vermont Robert Frost fell off one time when he was drunk, I think. It meets each summer for six weeks, takes five years to complete, and is available in different parts of the country. Last year, for example, Katie attended in the aforementioned Vermont; this year she's on on the campus of St. Johns College in Santa Fe, New Mexico.

Readers of this blog will only dribble morosely into their spit cups to hear that Bread Loaf (two words or they'll break your feckin' neck), welcomes students early into the zany world of post-structuralism.

Anyway, Santa Fe being a not-ungodly distance from Denver, Katie drove up for the weekend (explaining the paucity of posts, as if anyone but me sainted mither gives a crap). Stupid kid. I've been bringing up the name "Ward Churchill" every few seconds, making the connection to the pernicious theories of Derrida, et. al, shoving the Churchill Report into her hands, telling her stories of the jolly Satanists at Tryworks, showing her the pic of Chutch being interviewed by Barbara the Bovine, etc. She's sitting in the corner now, holding her throwing hatchet (see below).

Here are some pictures Katie took on the drive up. Strangely, all of them are of clouds: 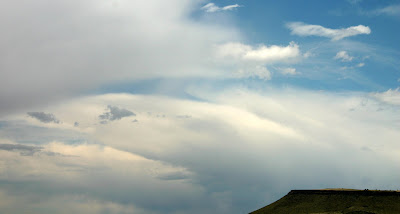 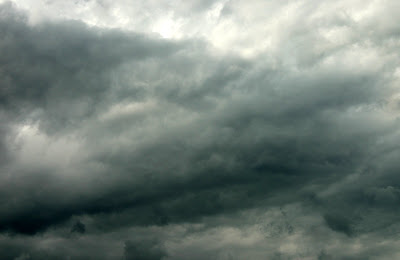 And clouds that look kind of like those boiling clouds in Close Encounters of the Third Kind* or that incredibly nasty piece of work, Independence Day, that show up to herald the approach of aliens (friendly and hostile, respectively).

We went downtown yesterday to walk around (these are all her pics too): 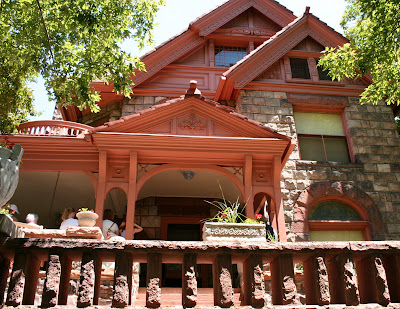 Vendors' tents reflected in the windows of the main library. Just by luck or whatever Pridefest was yesterday at Civic Center Park. Last year, of course, I went on purpose. 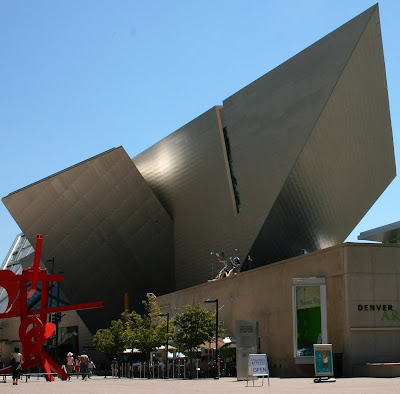 She had to get some shots of the art museum. Bravely into the future, and all that. (First time I've noticed its resemblance to Moby Dick, though.) 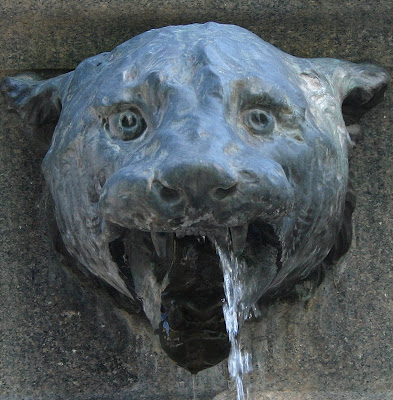 A mountain lion on the Pioneer Monument. Poor thing doesn't even have a dribble cup.

Update: Of course we got to talking about Katie's dad (my b-in-law), a cop whose humor (and not only his humor!) tends (he said circumspectly) toward the sadistic:

1. When Katie and her younger sister were adolescents, he would call home when Mom wasn't there, breathe heavily into the phone and whisper things like, "are you alone, little girl?" and such. Katie said it scared the shit out of them the first time (duh), but after that it was like, "Mom said to get some milk on the way home."

2. When they had slumber parties he would burst into the room, throw a live spider on the floor, shut off the lights and slam the door. Maybe they only had the one slumber party.

3. At an age when other girls were getting Barbie dolls, Katie got a throwing hatchet. For which Dad set up a tree-round target in the backyard.

4. Yes, I asked Katie if I could tell these stories.

*There's a dogpoop scooping service in Denver whose motto is "Specializing in close encounters of the turd kind." I know, but if it's so obvious, why didn't you think of it, smart guy?

Update II: Speaking of Pridefest, the Ballerina's got all kinds of humorous and informative posts of the (Ward) Churchillian variety, things this blog, sadly, lacks. Yes, in spades. This old piece on the "genocide" (scare quotes approved by the Institute for Fairness in Punctuation) of Native Americans is a particularly instructive linkage.
Posted by Focko Smitherman at 3:27 PM