Saturday Night at the Radio

All commie night! First, an episode of I Was a Communist for the F.B.I. This one's called "Jump to the Whip" (9-24-52). Sadly, hero Matt Cvetik's evil cell leader, "Comrade Ted," doesn't make an appearance.

Next, an episode of The Adventures of Sam Spade, starring Howard Duff. The show itself has nothing to do with communism, though Spade's creator, Dashiell Hammett, of course, did, and Duff was named in Red Channels. This one's called "The Flopsy, Mopsy and Cottontail Caper." 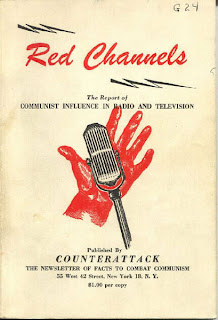 Posted by Focko Smitherman at 10:15 PM