Where are my manners? Allow me to introduce the mayor of Denver, John Hickenlooper: 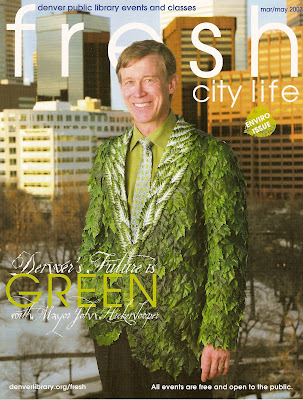 The papers call him "Hick."
I looked for a description of Hick's "green" suit but, nada.

GRAND JUNCTION — A hit-and-run suspect in a motorcycle accident that broke a 16-year-old boy's leg was captured after allegedly trying to swim away on the Colorado River, The Daily Sentinel reported.

The man eluded police for about three hours Saturday night before swimming to shore, naked, bloody and screaming, the newspaper reported. . . .

A witness reported a man walking toward the river, where he jumped in, police spokeswoman Linda Bowman said. The suspect eventually grabbed a partially submerged branch in the water and emerged after about 10 minutes.

This is why newspapers are dying. The reporter doesn't even tell us how, after only ten minutes, the malefactor managed to emerge from the river "naked, bloody" and, especially, "screaming."

Tom Mauser, whose son was killed in the Columbine massacre, wound up being the unwitting pawn in a longstanding feud between two gun rights activists that landed Friday in Jefferson County Court.

Darren Morrison was sentenced to five days in jail and a year's probation for sending threatening e-mails to Mauser while posing as Morrison's nemesis, Duncan Philp, leader of a gun rights group called the Tyranny Response Team. . . .

Morrison admitted he sent the e-mails to Mauser in an effort to get Philp in trouble. Since his son's death, Mauser has been an outspoken advocate for gun control, and Philp had demonstrated in front of his home in 2001.

Pure peckerhead. But I ♥ free speech. Up to a point:

In the e-mails, which Morrison signed with Philp's name, he threatened to kill Mauser.

"I will be protesting you (sic) house real soon. I will disrupt your life and I will be armed," Morrison wrote Dec. 1, posing as Philp.

On Dec. 6, he sent another e-mail telling Mauser, "I have a laser site on my 50 cal as well as a home made silencer. I have spotted planes fling (sic) into DIA. I could easly (sic) shoot one down so do not take any trips for a while././.You want to take away my right to own a gun because your loser son got shot."

Prosecutor Patrick Fitzgerald said the reference to shooting down planes caused the FBI to become involved and put DIA on alert for a short time.

He threatened to kill people and shoot down a passenger plane and got only five days in jail. But there's more:

After his arrest for the Mauser e-mails, Morrison went on to send other "unfriendly" e-mails to the Pink Pistols Gun Club, Fitzgerald said.

Apparently not so unfriendly as threatening their lives. But all is forgiven, because like a little man,

Morrison apologized and promised he would never do such a thing again.

And it worked! Besides the five-day sentence the judge

ordered Morrison to perform 60 hours of community service and to stay away from guns, the Internet and the Mauser family.

The anti-gun nut has to stay away from guns. That's, like, super-ironic.

Posted by Focko Smitherman at 11:46 PM