Back downtown this evening to see his appearance on the west steps of the Capitol to flog his new movie Sicko push for universal health care. Took a lot of pics and a few notes: 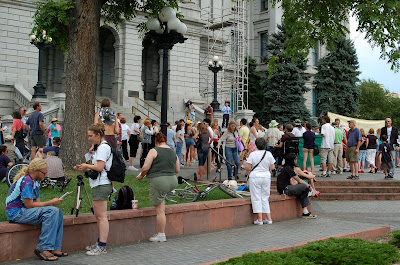 Many signs, of course. 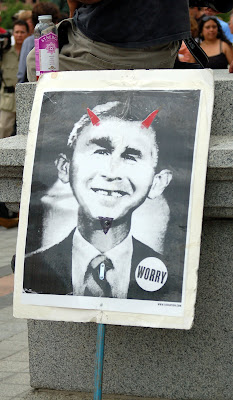 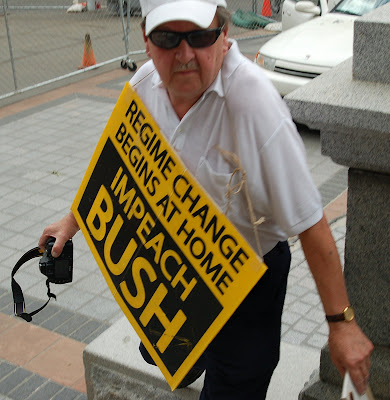 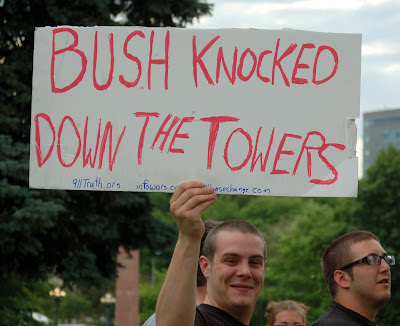 Yep, the troofers showed up. 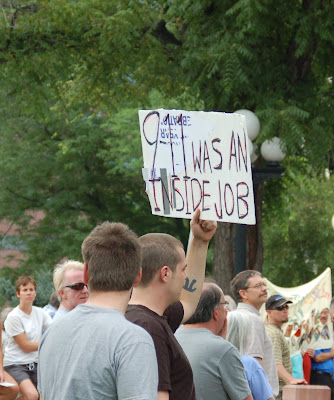 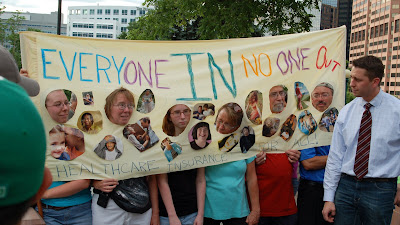 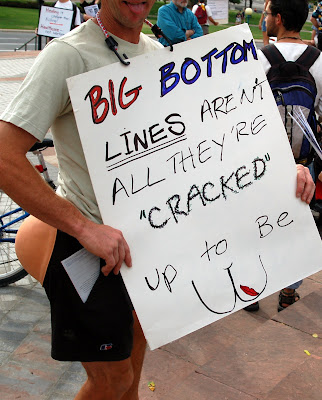 Ha-ha! He's wearing a fake butt! Get it? A few minutes later he was dancing up and down the Capitol steps wagging the very same butt. This significantly furthered the cause of single-payer health care. 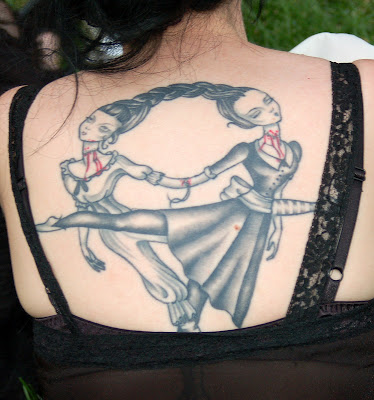 Goth chick reminds us of our mortality. 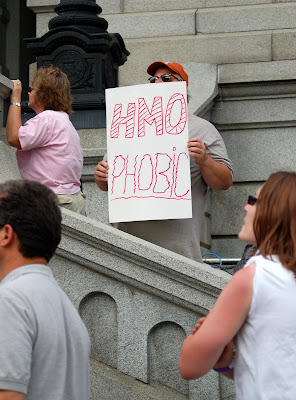 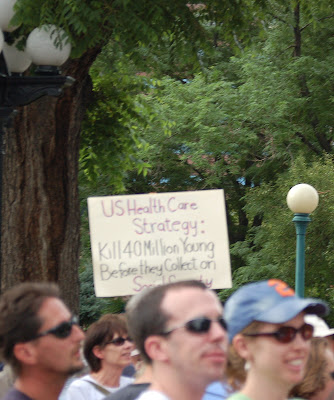 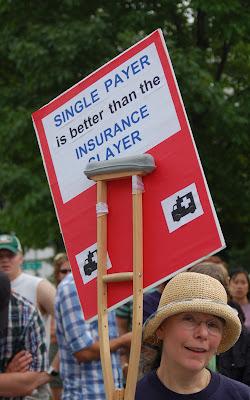 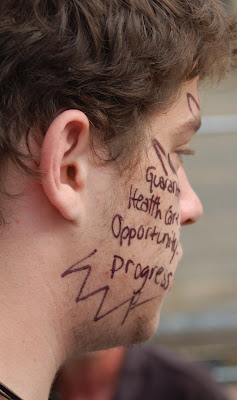 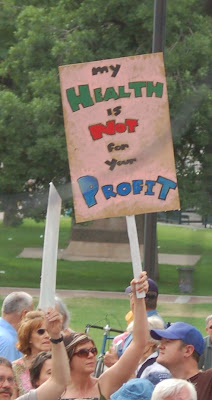 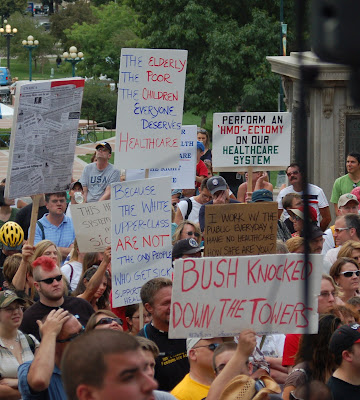 Gink comes out and yells, are you ready for Michael Moore? Yeah! Well, we have some other speakers first! Pssssssssh, the balloon goes a little flat. First speaker didn't quite make it into the movie, maybe because he doesn't sound like your typical case: his son was born with hemophilia, and the insurance company, United Healthcare, has been fighting payment almost from the beginning.

Hemophilia? How did that happen, and might it have something to do with the precariousness of his son's coverage? He didn't say.

Next up was Donna Smith of Aurora, Colorado. 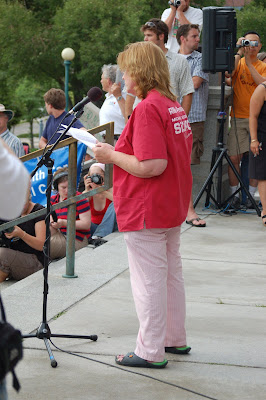 Donna appears in the movie and is one of the people who went to Cuba with Moore to take advantage of their world-class healthcare system. "I will not rest until every American has access to free, universal health care!" [Update: Moore's site says Smith suffered from asthma and sleep apnea.]
Then it was Moore's turn. 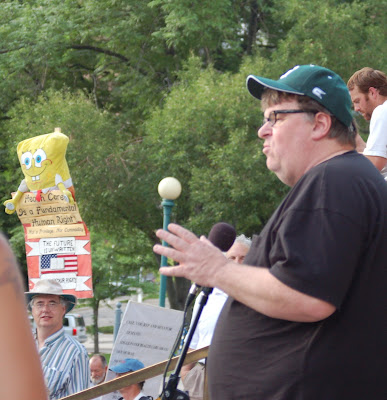 "Medical bills are the number one cause of bankruptcy and homelessness." (Moore said that, not Spongebob. Of course.) 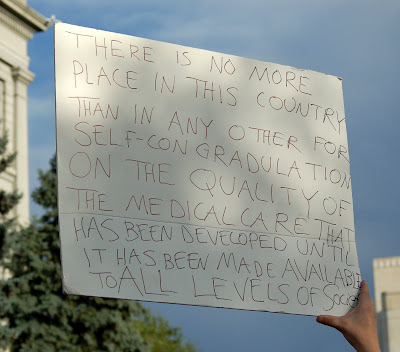 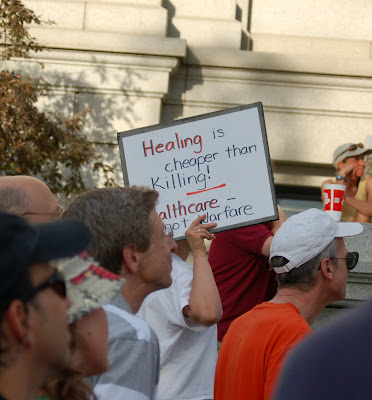 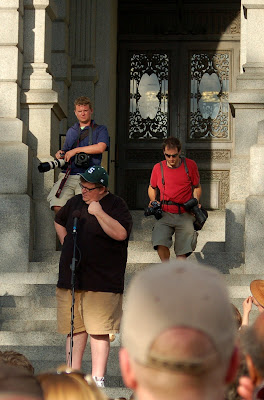 Michael, meet Ward: The American way of "pulling yourself up by your bootstraps" might have worked when "we were exterminating the natives" and enslaving blacks, but it doesn't work so well now. 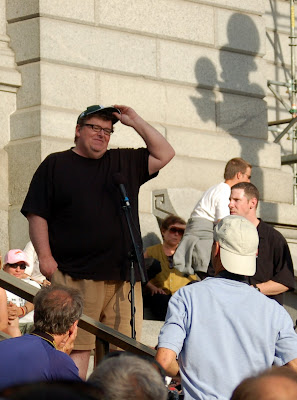 Moore said he's dropped 30 pounds. "If you come from my part of the country, you know I'm one of the skinny ones." 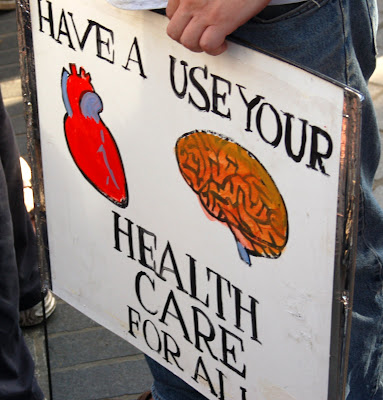 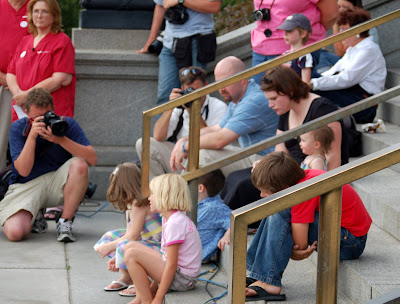 "Think of the children" photo op. 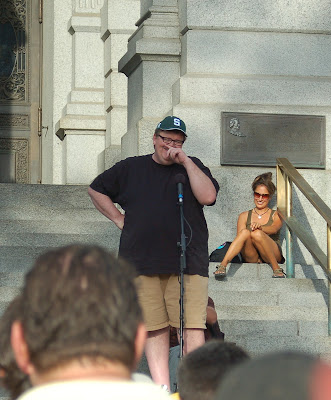 On the war: "I hold the media more responsible for this war than George W. Bush. He didn't know any better."

A heckler started shouting somewhere in the crowd, and a few moments later stalked right by me. 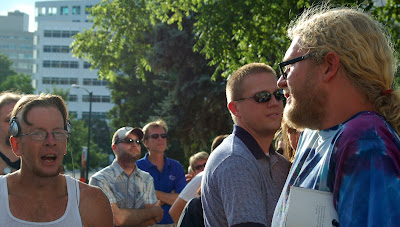 Heckler (l); gentle hippie (r). GH: Peace, man. H: Oh, peace, man. Wanna stroke my cock? Huh? Wanna stroke my cock? This significantly furthered the conservative cause. [Update: Gentle Hippie could have crushed the asshole's skull like a blood-filled tick, to use a Dan Ratherism. Oh, it's not? Maybe I should go back into therapy.]

After Moore finished speaking there was a press conference to which only "media" were invited. Some official type asked who I was with and, informed I was only a lonesome blogger, asked the name of the thing, shook me by the paw and let me through. Shocking. Unfortunately I still couldn't hear the questions, so I just kept shooting. 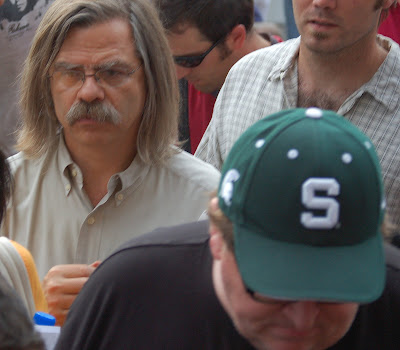 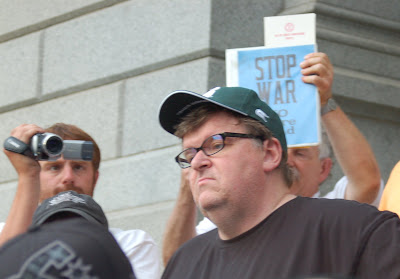 The presidential candidate Moore backs will support: free universal healthcare, abolition of private health insurance, "strictly regulated" pharmaceutical companies ("as if they were public utilities"), and the banning of campaign contributions from pharmas and health insurers--in fact, the banning of (private) campaign funding altogether. 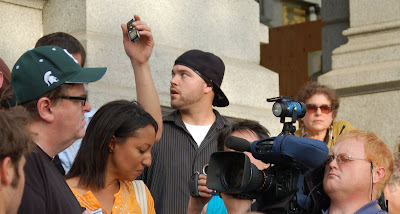 The candidate who comes closest to Moore's ideal on the issues? "His name rhymes with 'floor.'" My guess? Dennis Kucinich.

That's about it. Some guy said he'd have the whole thing up on Youtube tomorrow. I'll link to it. 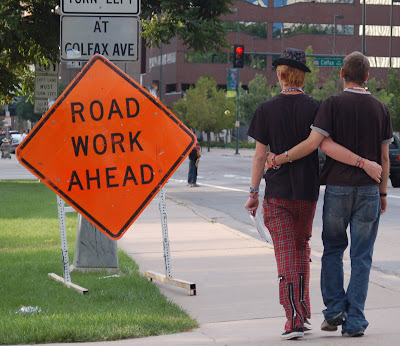 Update: Still no vid of the event at Tubeyou.
Posted by Focko Smitherman at 11:34 PM