The News: "Some see red on Denver's green plan"

The reaction was to a Rocky Mountain News story that detailed some of the proposals in Denver's Climate Action Plan, which aims to cut the city's output of gas emissions linked to global warming.

The plan includes several controversial ideas, including making residents who use large amounts of electricity and natural gas pay higher utility fees, boosting insurance rates for people who drive long distances and mandating that homes be energy efficient before they can be sold.

After the online RockyMountainNews.com version of the story was posted as the lead item on Drudgereport.com, the phones started ringing at Mayor John Hickenlooper's office. Many of the calls were from people accusing the city of embracing a radical environmental agenda.

"We've gotten a bunch of phone calls, but nothing like a good snowstorm," Hickenlooper said.

E-mails to the city and the Rocky from around the country called the plan crackpot," "loony" and even "stupid."

"According to most polls, 70 percent of the people in Colorado recognize there is global warming," he said. . . .

Finally, the definitive proof of gobble warping we've been waiting for.

Some of the proposals in Denver's plan that might sound radical to residents are already in place in other states. California, for example, charges heavy users of electricity higher rates.

Oh, well, if California's doing it. And what's the News doing jollying people out of thinking something might be radical, anyway?

MacKenzie apparently is an idiot on many fronts.

"The mayor is willing to use his popularity to ask people to do difficult things," she said. "I hope people are ready to take this on."

I'll take you to the home now, Kathleen. As for Mayor Hick: 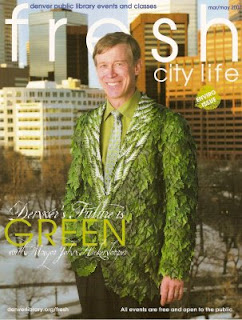 That green suit has grown into his brain.

Update: Oddly, El Presidente doesn't think much of the plan either.

Posted by Focko Smitherman at 1:04 PM