Police Pictures: The Photograph as Evidence. Chock full of fascinating photos, marred by a predictable po-mo-ness. The book begins: "We need criminals because they are not us. Crimes are transgressive acts, committed by those we define as outside the norm . . ."

What are you going to do? But amazing stuff: 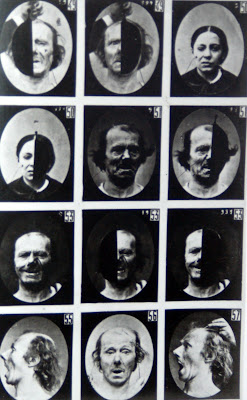 Creepy. From The Mechanism of Human Facial Expression (1876). 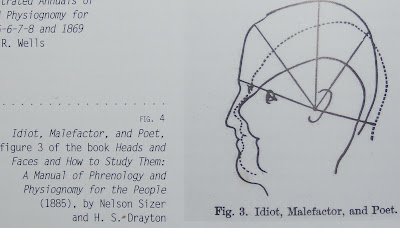 Are we moving from big to little or little to big? 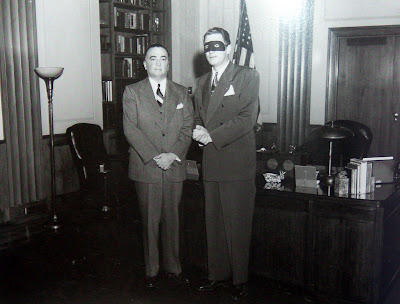 Sorry, I keep using that vulgarity (blown, blow me) today. Sometimes it's simply the right thing to say, but I'll try to taper off.

Update: Some spavined gink in comments claims to see a resemblance between the poor guy in the Human Facial Expression pictures (particularly number 57) and your darling but admittedly strange-looking Drunkablog. What I noticed was his resemblance (far left, second row from bottom) to Jack Nicholson toward the end of The Shining. Herrrre's Johnny!

Update II: And what is with that hand in some of the pics? Could it be the hand of the researcher, bonking the poor rummy (one assumes) on the noggin in order to induce the pictured expressions? Ah, the Majesty of Science. And don't look too close, but in number 57 he's clearly shoving an 8-penny nail into the guy's brain. Bet there wasn't a consent form for that.
Posted by Focko Smitherman at 7:30 PM