Anybody know if the paper by Prof. Thomas Brown abstracted at Plagiary (scroll down fo' Thomas Brown) but not yet linked, has been published anywhere else?

This article observes that Ward Churchill and his defenders have offered twelve different excuses for the plagiarism charges against Churchill. The excuses are contrasted with the established ethical standards governing American scholars. Each excuse is also compared against the available evidence in Churchill's case specifically. It is found that several of Churchill's excuses highlight ambiguities in the established ethical standards, indicating the need for further debate in the scholarly community in order to more precisely delineate the boundary between ethical scholarship and unethical scholarship. It is also found that the evidence of Churchill's plagiarism overwhelms any ambiguities, and that each of his twelve excuses fails to justify his plagiarism.

More: Churchill will be at the Edmonton Anarchist Book Fair October 25, speaking on the Tony Robbins-like subject, "Organizing to Win." 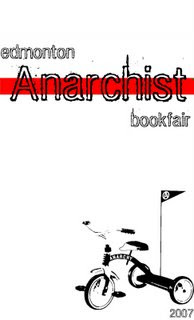 Posted by Focko Smitherman at 6:21 PM