Got the case report of the infamous ejection of Boulder Daily Camera reporter Heath Urie from Ward Churchill's free class at CU October 2.

It's a confused account. CU ethnic studies instructor Ben Whitmer has said that Urie "ran into his hand" as he entered the room (in the report Urie says Benjie "shoved" his right shoulder), and Urie seems at first to be identifying Whitmer also as the one who grabbed him and pulled him toward the door, saying "I'll fucking make you leave":

What, can't read it? Get stronger glasses, four-eyes! (Or click on pic.)

Then Urie decided it was actually Dillabaugh who done the deed: 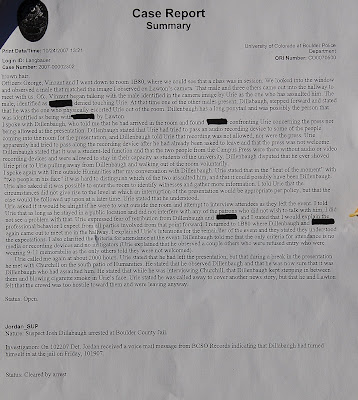 The blacked-out name, of course, is Whitmer's. The fuzz continues:

Urie expressed fear of retribution from Dillenbaugh [sic] and [Whitmer], and I stated that I would explain the professional behavior I expect from all parties involved from this point forward. . . .

Professional behavior. Turns out Urie had reason to worry:

Urie called me again at about 2000 hours. Urie stated that he had left the presentation, but that during a break in the presentation he met with Churchill on the south patio of Humanities. He stated that he observed Dillenbaugh and that he was now sure that it was Dillenbaugh who had assaulted him. He stated that while he was interviewing Churchill, that Dillenbaugh kept stepping in between them and blowing cigarette smoke in Urie's face. Urie stated he was called away to cover another news story, but that he and Lawton felt that the crowd was too hostile toward them and were leaving anyway.

Chutchites, hostile? Urie has to be making it up. But think of Wart, sitting there smirking over his Pall Mall as his thug blows smoke in Urie's face. Scum.

Update: Oh yeah, you'll notice that Dillabaugh was arrested on the 22nd on a charge of third-degree battery.
Posted by Focko Smitherman at 6:45 PM