Going through my wallet just now to throw away the smaller bills (the Drunkablog does not deign to use $1's, $5's or $10's) I found a bill with this curious notation stamped on it: 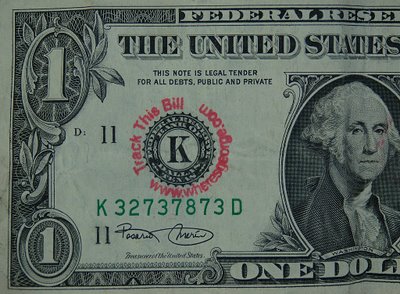 Basically an automaton that does what it's told, the Drunkablog duly went to wheresgeorge.com and entered the bill's serial number to see where it had been.

The wheresgeorge site has been around since 1998, supported, as the Washington Post explained in 2002, "by advertising, sales of T-shirts and other memorabilia, and by users who pay a fee for extra features." The Post continues:

If you haven't seen one of these bills, it's no surprise. There's about $600 billion worth of U.S. paper money circulating worldwide, according to the Treasury Department. In contrast, only about $101 million has been stamped "wheresgeorge." The bill with the most "hits" has been registered 13 times. But more than a million registered users seem to be obsessed with it.

Users compete for a "George Score," which takes into account how many bills they've entered and how many "hits" their bills get. Most high-ranking players have entered about 60,000 bills apiece. (One has entered more than 124,000 bills.)

The single bill the Drunkablog entered has traveled a total of 17 miles in 18 days. Pathetic. Boring, too. I mean, who cares? As the Post wisely pointed out,

[S]ome people wonder if sitting at a computer typing in dozens of serial numbers isn't kind of, well, dopey. Fans say you have to be intrigued by the thrill of seeing where money goes. Says hard-core Georger Tom Walsh, of Georgia: "You either get it, or you don't."

The Drunkablog don't, and now, neither do you.
Posted by Focko Smitherman at 5:33 PM