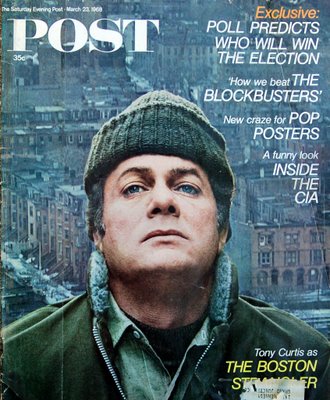 Damn those mailing labels: The Boston what?
Straight to the Speaking Out column: "Our Military Reserves Are No Good," by Lawrence Dietz:

A couple of weeks ago I sat, stupefied, through a TV rerun of the movie Buck Privates, a 1941 Abbott and Costello slapstick comedy. It occurred to me as I watched it that, with a change in costumes, Buck Privates would serve very nicely as a serious documentary about today's military reserves.

Googling "Lawrence Dietz" I found this story from 2005 quoting a "Retired U.S. Army Reserve Col. Lawrence Dietz." Almost has to be him, doesn't it?

Then a long piece on the results of a poll of an Indiana county that had voted for the winning presidential ticket almost every time since 1896: 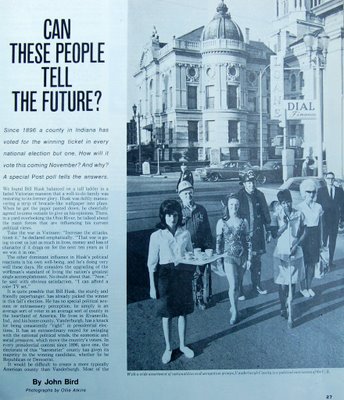 Despite their record, the county was wrong in this poll too, picking Johnson as the winner against Nixon--one week before Johnson withdrew from the race. Fun quote: "[Ronald Reagan's] TV image as a Good American impresses individuals who see in him a reflection of their own views. Janet Williams, the barmaid who hates hippies, thinks Reagan is worth giving a chance. I like the things he has to say about this country.'" 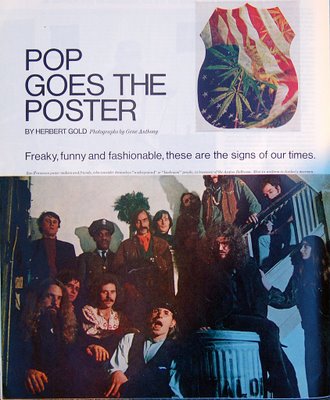 Never heard of any of the artists mentioned in this story, but here's a little about William Satty and (if this is the same guy) Wes Wilson.

"San Francisco Rock is the Acapulco gold of rock 'n' roll. San Francisco posters, the Nouveau Frisco style and its offshoots, are the vanguard of the poster art."

A single quote from the profile (touting the release of The Boston Strangler) of Tony Curtis:

"I was constantly buying off everybody," Curtis explains. "My mother would come to the Paramount set and I'd say, 'Ma, how much do you want to leave me alone today? Thirty dollars, a new dress, or what?' I didn't trust people. I was literally afraid of people and animals, especially dogs." 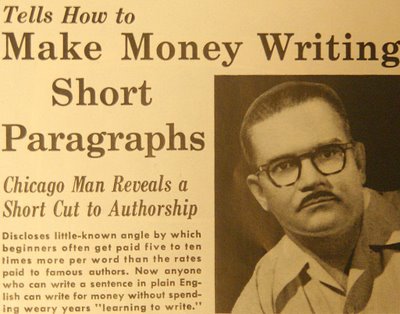 Look into my eyes: He foresaw blogging! Except for getting the "making money" part slightly wrong!
And finally, an editorial that mentions a historical incident--and a quote about it--fondly remembered by 60s types: "Victory by destruction":

Ben Tre, a relatively peaceful town of 50,000 inhabitants in the Mekong River Delta, was entered by Communist guerrillas last month as part of the Viet Cong's winter offensive agains the cities of South Vietnam. To expel the guerrillas, American planes and artillery promptly blasted Ben Tre with high explosives and napalm. One American officer explained this, according to the Associated Press, by saying, "It became necessary to destroy the town to save it."

Posted by Focko Smitherman at 10:19 PM