The Rocky Mountain News' Rockytalk blog asked readers if it was appropriate for the paper to run the picture everybody's seen of a very dead Abu Musab Al-Zarqawi on its front page: 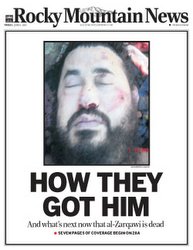 Most of the commenters were rational, more or less, and supported the decision to run the picture, so I won't bother with them. Here, though, are a few of the crazier reactions:

From "in market for evil dictator nuggets":

I think they should put the head in famaldahyde [sic] and sell it on e-bay. . . . And it would be a great conversation piece while entertaining. Would be cool if the eyes could twitch and a neck vein could pulsate.

This is disgraceful. The Geneva Convention prohibits the display of dead or captured enemy combatants. The US should pay compensation to the people of Iraq and to his family immediately.

If they put it on a stick and parade it through the streets of Denver, it would be a new excuse to drink [my man!--ed.].

From "Man of Truth":

Posted by Focko Smitherman at 9:28 PM