Ran across a site that displays "V for Victory" stuff from World War II. It's run by idiots who won't allow links, so here: http://www.ww2homefront.com/vforvictory/v-for-victory.html. Lots of neato items, but they don't appear to have an example of one I found years ago at a garage sale: 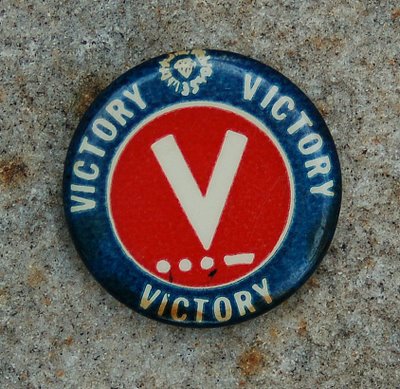 A button. Note the dot-dot-dot-dash--"v" in Morse Code. The site doesn't point out an additional factoid: BBC broadcasts to occupied Europe began with the first four notes of Beethoven's Fifth. Get it? Dot-dot-dot-daaaash. Cool.
Update: In order to "balance" my unhostile mention of the BBC, here's a link to B-BBC, currently discussing the false Iraq massacre story the new and not-improved BBC embarrassed themselves with this week.
Posted by Focko Smitherman at 5:20 PM