Knew it was going to be a music issue this week, but couldn't decide between the Beatles: 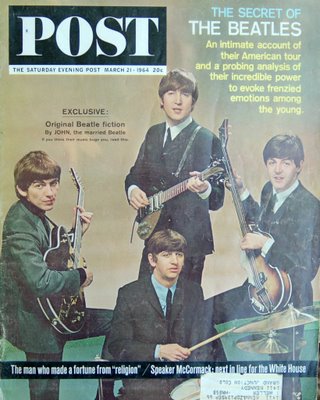 Cover story on the elevator-music specialists just after their first American tour. (Elvis Costello is said to have retorted Stipe-ward, "If it weren't for this elevator music, you'd still be taking the stairs." I have no idea what that means.)
And Dylan: 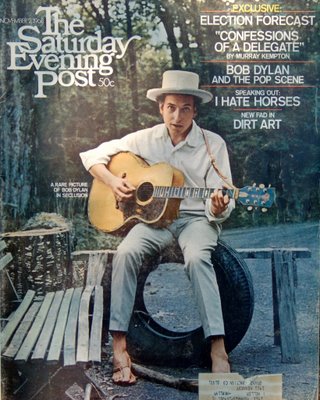 Like he's the pope or something: "A rare picture of Bob Dylan in seclusion."

Okay, it's the Beatles. Let's "meet" them. But first! This week's issue begins with next week's stories: 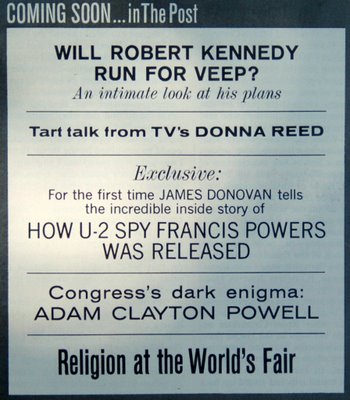 Can't wait for "Tart talk." But Kennedy for veep? Who cares! I want to know what scoundrel stole the the "Gary" from Francis Gary Powers. Not sure that "dark enigma" piece would go over so well in our present modern times of today, either. 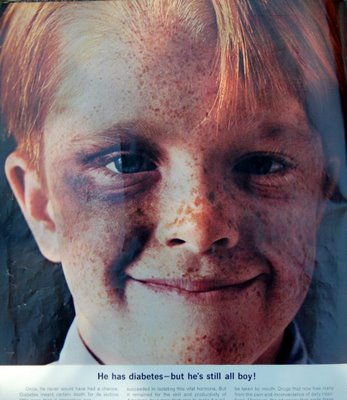 And now he has Daddy's gun.

Couple of "interesting" letters to the editor. John Glenn's first run for the Senate inspires this effort: "I predict A-OK all the way to the White House for John Glenn.--Cecil W. Tisdell, Dougherty, Okla." (Actually if you scroll down to the "political life" section of Glenn's wiki you'll learn that he withdrew from the race after being attacked by a bathroom mirror. Who'd a'thunk?)

The other is a letter from the editor of The (London) Observer, David Astor, disputing the Post's claim that the newspaper hired Soviet spy Kim Philby even though "the highest executives of The Observer were made aware from the beginning that Philby was under suspicion, though nothing had been proved."

Astor replies that this is "the very reverse of the truth," and a 2006 Guardian timeline of The Observer has this to say:

1963 Kim Philby, widely accused of being the Third Man (the Soviet Spy who had let it be known that Donald Maclean was about to be exposed), was cleared by the British and American Government. He became the Observer's Middle East correspondent based in Beirut but was expelled and fled to Moscow. He had been the Third Man all along.

Were our faces red!

Next comes some happy talk: 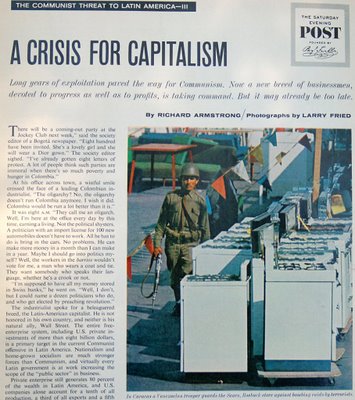 Then the first of three (urp) articles on the Beatles, this one clumsily titled "Yeah! Yeah! Yeah! Music's gold bugs: The Beatles." Typical condescending early-Beatlemania bilge. Only the catty description of Brian Epstein as a "delicately mannered young man who once wanted to be a dress designer" stands out.

Then the man who warned America about the supposed dangers of subliminal advertising, Vance Packard, analyzes the Beatles' appeal. For the life of me I can't figure out what he's insinuating here:

The subconscious need that they fill most expertly is in taking adolescent girls clear out of this world. The youngsters in the darkened audiences can let go all inhibitions in a quite primitive sense when the Beatles cut loose. They can retreat from rationality and individuality. Mob pathology takes over, and they are momentarily freed of all civilization's restraints.

The Beatles have become peculiarly adept at giving girls this release.

Then a couple of pages of Lennon's, um, "Beatalic graphospasms":

Thorg hilly grove and burly ive,
Big daleys grass and tree
We clobber ever gallup
Deaf Ted, Danoota, and me.

Finally, the obligatory editorial, "Two cheers for the Beatles." It begins,

The Beatles have come and gone. Press-agentry has scored one of its greatest triumphs since the Ringling Brothers' Thomas Leef planted a midget on J.P. Morgan's knee.

Update: I've seen it a million times, but repeated searches failed to turn up the famous "midget in Morgan's lap" picture.

Update II: Special to Drunkablog regulars (if any): my friends, I used Wikipedia a lot in this post for historical background, so feel free not to click on anything that looks too, you know, difficult.
Posted by Focko Smitherman at 6:40 PM