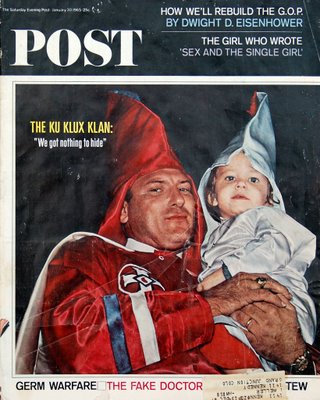 Can't seem to find the name of this Kleagle or Kludd or whatever he is in the article, but I wonder what the little lad thinks of this shot now?
This week's "Speakout" column gets things off to a rip-roaring start with "What's so terrible about germ warfare?" by Clifford F. Rassweiler ("Ph.D, Sc.D"). Rassweiler (Ph.D, Sc.D) begins:

We Americans put too much confidence in . . . the knowledge that by pressing a button we can destroy cities and even civilizations. We are victims of complacency. We have fallen far behind the Russians in the kind of warfare that many top military scientists predict will be the next step in the evolution of war--chemical and biological weapons. . . .

[T]there is the clear possibility that if we give this new kind of weapon the attention and support it deserves, we can make war more humane, even "benign."

Beeeeeooooo! Whoop whoop whoop! Tilt! Oh, the caption under Cliff's picture notes that besides being a Ph.D and Sc.D he had been "president of the American Chemical Society and the Industrial Research Institute" as well as "vice president of Johns-Manville Corp."

Next up is Eisenhower on what the Republican Party had to do to survive. This, of course, was a mere three months after LBJ's landslide victory against Barry Goldwater. Blurb: "Only by proving that it rejects 'reactionary, extremist and racist' ideology can the G.O.P. recover from its disastrous defeat in November." Good advice, Dwight! (Do you think he had a bowling shirt with "Dwight" written in scripty letters on the front?)

Then the cover story on the Klan. Representative quote:

The ignorant and frightened men and women who join the Klan claim to be uplifted by [its] savage doctrine. To them the Klan is a religion, a holy crusade. In North Carolina, a robed Klansman told reporters: "I feel nearer to God at a rally than at any other time. When I put on this robe it's a grand feeling. It's white--as pure as Jesus Christ."

I believe the Saturday Evening Post was biased against the Klan! Here's a good picture: 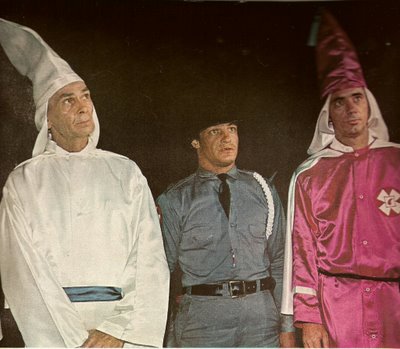 D'oh: no Ph.Ds or Sc.Ds in this bunch.
Next up is Joan Didion, and guess what? She's depressed! At least it's for good reason this time as she profiles Helen Gurley Brown, recent author of Sex and the Single Girl and Sex at the Office [rowwwwwwwrrrr--ed.]. Gurley Brown's audience, Didion notes genially, inhabits "a twilight world of the lonely, the subliterate, [and] the culturally deprived . . . whose last contact with the printed and bound word was Calories Don't Count."

This issue also has a profound example of how things never really change in a piece on the Museum of Modern Art. Sample quote, about an upcoming show:

Then there is The Responsive Eye, which the musuem has been working on for more than a year. Defining the criteria for acceptance, a museum staffer said, "If it makes you almost sick to your stomach, it's bound to get in."

Finally, the mandatory fake-doctor story. Whatever. Look, Life, and the Sat Eve Post were strangely fascinated by people who posed as what they weren't--almost as much as they were by quintuplets. (I thought Catch Me If You Can did a pretty good job of evoking that fascination, even though Lenny DiCaprio almost makes me sick to my stom--never mind.)

Update: There was a movie called Sex and the Single Girl as well. Here's a reviewer at Amazon:

Now get this one. In the early 1960s, Helen Gurley Brown wrote a decidedly controversial book on changing sexual mores among young American women. Hollywood bought the rights, threw out the entire book, and then tacked the title onto an extremely sexist little comedy.