Lazy title. The Rocky again mines its own pages for stories from the 1908 Democratic National Convention:

Bunting of red, white and blue lined 17th Street from Union Station all the way up to Broadway.

Lady Denver handed the city's key to a Democratic donkey in a light display shining brightly atop the roof of the Gas and Electric Building at Tremont Place.

Oom-pah bands met each state delegation, then marched the delegates to their hotels - the Albany at 17th and Stout streets, the Metropole on Broadway, the Plaza, the Interocean, the Shirley and the Savoy.

Gee, just like the anarchists plan (ned?) to do at this convention. And don't call that hotel Shirley.

Trains chugged up Corona Pass to the Continental Divide, where snow was packed into hopper cars and then brought back and dumped on city streets for the amusement of hot and weary conventioneers.

R68-ee Glenn Spagnuolo will love this:

A troupe of city-hired Indians met the New York delegation from Tammany Hall. And 40 Apaches from a New Mexico reservation were paid to camp in City Park.

The paper was totally in the tank for William Jennings Bryan, whom it always calls "the Commoner" without quotation marks, ironic or otherwise. Lots of mentions that opponent William "Howard" Taft had called U.S. Grant a drunk:

In a Memorial Day address, Secretary of War William H. Taft said that former President Ulysses Grant did not take over command of the Union Army sooner because he was a drunkard. Soldiers who fought with Grant are now furious Taft would say such a Thing about their former general. But Taft claims Grant’s weakness only made him greater after overcoming the addiction.

And, naturally, a story on prostitution in Denver:

City officials at the time may have looked the other way when prostitution was rampant, especially along Market Street.

But it was hard to ignore the Denver Red Book.

A pocket-sized advertising directory, it gave the discreet gentleman of the day all the information he needed to find a night out in turn-of-the-century Denver.

"A Reliable Directory of the Pleasure Resorts of Denver," reads the first inside page of a copy held by the Colorado Historical Society. 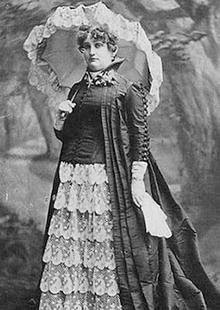 The hankie is hot: "Denver Madame Mattie Silks operated a brothel at 20th and Market streets" (RMN caption).
Posted by Focko Smitherman at 9:51 AM