Atheists put up "Imagine No Religion" billboard in downtown Denver

Effectively admitting they have no lives. Front page of the Post:

Denver's secularists wanting freedom from religion have taken over one corner in the public square to make the point.

They've emblazoned a billboard six blocks from the state Capitol with the message, inscribed over faux stained glass, "Imagine No Religion." 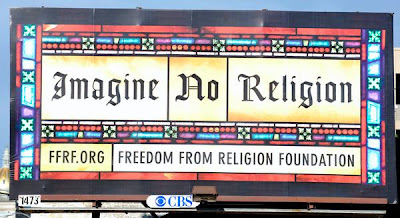 More than 2,000 religions have fueled division and rancor among peoples and hindered scientific and social progress, said Michael Lee Smith, local spokesman for the Freedom From Religion Foundation. The world would be better off without organized religion, he said.

The billboard, part of a national ad campaign, is scheduled to stand above West 14th Avenue and Fox Street through June and July. It will come down before the Democratic National Convention because the rate for that period was prohibitively high, Smith said.

Preaching to the choir, anyway.

"The religious right is not a majority, but it has a strong voice and a lot of influence," Smith said. "We want to uphold the separation of church and state."

Ergo: a billboard. Passers-by didn't give a shit:

A construction worker on the block, 37-year-old David Rodriguez, said his religion has been an important help in raising his family, yet he respects differing views.

Passer-by Joseph Sanchez, 23, said the billboard didn't upset him but that he doesn't agree with it.

"I'm not really big on organized religion, but I love religion," Sanchez said. "It's important for people to keep religion somewhere in the back of their mind but not to take it too seriously."

Read whole thing, but get the director of the Council of Colorado Churches:

"I always support their freedom of speech," council director Jim Ryan said of the foundation. "But the foundation is failing to acknowledge all the moral values and work for the common good that has grown out of faith traditions."

Sounds all ready to go to the stake for his God, doesn't he?
Posted by Focko Smitherman at 9:37 AM