Another hot headline. The News:

Riding someone's coattails is a time-honored political tradition that the Re-create 68 Alliance and a Crested Butte-based arts group will follow when they piggyback on each others' permits for Civic Center during the Democratic National Convention.

As a result "Pictures of You: Images From Iran," an installation on that country's people and culture, will be on view there Aug. 25-26. In turn, Re-create 68 will have use of Civic Center for two days, as they originally wanted.

Convenient and politically correct! This is good:

[R68er Barbara] Cohen sees sharing as a way "to connect our projects" in Civic Center and beyond, into Lincoln Park and the Capitol, where the group also has state permits.

"They almost immediately agreed to share the space for 48 hours," she said. "There isn't going to be any trouble. There was never any threat to take over the park."

Really? Somebody should let all-purpose homunculus Benjie "The Permits Are Irrelevant" Whitmer know that.

More DNC: Host committee might consolidate parties to save money:

After months of planning for two-dozen parties to fete the 56 delegations to the Democratic National Convention, the city's host committee is considering scrapping those parties in favor of one, single bash. . . .

"It's more an effort to invite all the delegations into one really cool event," Lopez said, adding that a single party could help build party unity following the long, divisive primary. "It would be a pretty cool event."

Yeah, sure. Rumor is they're looking to cut back on entertainment as well.

Update: Clown with an ax. Not good.

Update II: Really, really not good. So not-good one must spread the not-goodness: 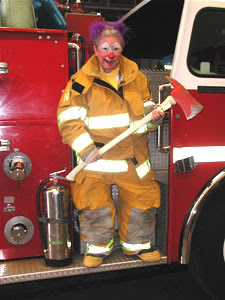 Update III: Okay, Axie's coming down pretty soon. I didn't get permission to run the pic, and there ain't nothin' holds a grudge like a clown.
Posted by Focko Smitherman at 7:27 AM