A new city is coming to Denver, representatives for Re-create 68 and other anti-war activists announced this afternoon at Civic Center park.

“Free City” as the four activists [lemme guess: Spagnoodles, the two Cohens and Larry Hales] renamed the park, will attempt to open the Sunday before the 2008 Democratic National Convention gets underway, set up tents and exist all the way through convention week, Aug. 25-28.

The activists briefly set up a sky-blue sign with the words FREE CITY in white. Yellow tulip-like flowers that bloomed in the shape of fists brightened the borders.

Within seconds of the four’s attempt to hammer the sign into the ground, wind blew it over.

Nice eye for the telling detail, Chuck. (Chuck keeps on making fun of these people, they might grow to dislike him. He'll enjoy that.)

The residents of “Free City” will attempt to occupy the park beyond the legal rights R-68 affiliates have to the park, Spagnuolo said. Last month, in a blind lottery, R-68 and its affiliates won permits to use the park on Aug. 25 and 27, a Monday and Wednesday. By allowing camping in the park after curfew, Free City will also be in violation of city rules that forbid overnight stays. . . .

Ask what Free City would do if police tried to enforce the rules and tried to remove the occupants, Spagnuolo would only say that Free City’s occupants wouldn’t leave.

Spagnuolo has said many times in the past that the largest march of the protesters would be an anti-war march that started Sunday morning at Civic Center and made way for the Pepsi Center, site of the convention hall.

Today he said whatever happened Sunday would be organic and without leaders.

Update: 9News (say that in a deep, manly announcer's voice like it's the most important and exciting phrase in the world) actually sent a crew to film the four revolutionaries, no doubt as a result of R!!!68's media communiqué, and has some quotage from Spags:

"We're here today to formally reject societies and governments that celebrate greed and consumption. We reject a society that oppresses its own members and others and destroys its environment for profit. We reject a government that was built upon and commits genocide," he said.

Fine, fine. Then 9News went to RMN jazz critic Norman Proviser and asked him for his deep thoughts:

Professor Norman Provizer, of the Metro State Political Science Department, says the Recreate '68 group's message may be a little vague. He looked over their Web site, which urges protestors to gather in Denver for the August convention.

What do you want to bet they had film here of him sitting at a computer looking at R68's website?

"I think there's a recognition that the right to protest is extremely important. But that comes with limits," Provizer said.

Bold. Uncompromising. That's Norman. On the other hand:

Provizer says the government has a strong interest in making sure protestors do not incite violence or illegal behavior.

"That's why there's a right to peaceably assemble. There's a set of limits placed on that right by the Supreme Court referring to time, place and manner. There is no right to assemble in a non-peaceable manner," he said.

Update II: Not sure this needs to be pointed out, but by calling the Sunday march (or any other !R68 event he wants to) "organic," Spagnuolo of course is trying to give himself an out for anything that happens, violence- or vandalism-wise--you know, charges like incitement to riot and the like.

Update III: My guess about who the four R68ers were was wrong. Fox News has a pic (and story by poor Charlie Brennan): 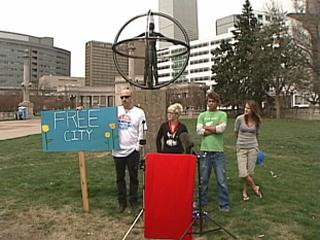 And the Rocky identifies them:

Adam Jung and Jojo Pease, of the group Tent State University, and Zoe Williams, of Colorado Street Medics, joined Spagnuolo at the press conference. They said the "tent city" would operate on a "10-point program" that included being free of racism, sexism and homophobia.

And yes, one of the most fun ones - there will be free love as long as it's consensual," Jung said.

Spagnuolo said events are being planned at Civic Center, even on days when others have permits.

"Some folks are actually organizing a nude-in where they're going to spell the word 'peace' out of nude bodies across the middle of the park," he said. "You're going to see a bunch of different things happening."

[City] Councilman Charlie Brown laughed when he heard that Civic Center had been christened with a new name, but then said Denver was going to have to be "firm and strong" with protesters.

"As far as I'm concerned, we're not going to back down," he said.

Brown said he was confident that police, the Secret Service and FBI would be ready to handle "what could be a very serious situation."

Re-create 68 has promised demonstrations that will rival those at the 1968 Democratic convention in Chicago, which saw street battles between police and anti-Vietnam War demonstrators.

Several members of the group and their affiliates participated in a lottery the city held to issue permits for park use during the convention, but failed to get all the days they wanted at Civic Center.

When the convention host committee won a permit last month for Civic Center on the eve of the convention, Spagnuolo said Denver could face a "dangerous situation."

Brown said the Re-create 68 protesters need to grow up.

"They acted like children when they lost the lottery," he said. "We need to let some cooler heads prevail here and perhaps get some adults in on this conversation."