Troofer umbrella group TruthAlliance.net has a piece on the DNC protests and Recreate68. They're being shut out, and they're not happy about it [all sic, natch]:

Even though 911 Truth has been around for a long time and has a massive network base, ReCreate 68 has been adamant about having anyone attend under their group name and they will not let any 911 truth speaker present, even when asked by We
Are Change Colorado on Sunday, April 13th's community meeting. How is it that a group that pops up out of no where gets so much press and 911 truth, Colorado 9/11 Visibility, We Are Change Colorado and many others have worked so hard to get attention from local media?

They're also not happy that !R68!! is operating under false pretenses:

Glenn Spagnuolo, the coordinator for the group, has ben traveling around the United States speaking with every activist group you can think of to coordinate them under his group. Code Pink, Food Not Bombs, Iraq Veterans Against the War, Green Peace, Scholars for Peace and Justice, and many famous immigration groups, unions, and anti-globalist activist networks are all working under ReCreate 68 with the thought that this group is just a peaceful festival of celebration. This is untrue.

[Update: It's untrue both that R!6!8!'s intentions are peaceful and that these groups are unaware of its real intentions, of course.]

By attending, these groups do not yet realize they will be giving up their message and name for the ReCreate 68 name which is permitted to protest. The problem with this is that ReCreate 68 has been inviting more radical groups and violent anarchist groups as well. To add to this, ReCreate 68 has not told other activist groups the extent of which these demonstrations will endanger the safety or security of any peaceful demonstration.

This would be news, if true: TruthAlliance claims to have a FEMA memo discussing Denver hospitals' assumptions and preparations for the DNC: 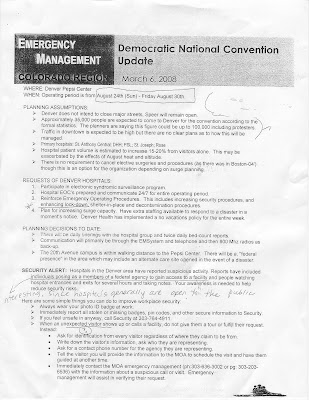 The most interesting part:

Security alert: Hospitals in the Denver area have reported suspicious activities. Reports have included individuals posing as members of a federal agency to gain access to a facility and people watching entrances and exits for several hours and taking notes. Your awareness is needed to help reduce security risks.

But since it's from a Troofer organization it's quite possibly, even probably, fake.

This also is new, though not surprising:

After speaking with RAIMD, We Are Change Colorado became aware that they intend to throw bags of urine and blood on cops at the DNC protests, all under the name of the umbrella organization ReCreate 68.

R!68's! lineal descent from the Direct Action Network and the Kohl's department store spray-painting incident were both news (to me), too.

Oh, you've got to watch poor old Gary Hart being harassed by We Are Change Colorado at a booksigning here a couple of weeks ago. He does okay, and gets gratifyingly irascible at the end, but even I have trouble believing he'd never heard of the North American Union before:

Update: Of course the feckin' embed won't work. Here's Gary (who once took my ticket) on The Jones Report. Lovely site.
Posted by Focko Smitherman at 2:42 PM