Okay, maybe not so groundbreaking:

When and where: 7 p.m. Wednesday, National Geographic Channel.

It all adds up.

Just one average American's lifetime consumption of beer, disposable diapers, loaves of bread or even energy required to power a hair dryer (three-quarters of a ton of coal just for this task) really makes a difference. . . .

My lifetime consumption of beer and disposable diapers (there's a direct correlation) must be quintuple the average American's. I feel so guilty.

This two-hour special is more than startling stats: It provides dramatic visual demonstrations revealing how much of the world's resources an average American consumes in a lifetime.

Even a number like 28,433 (total showers taken in a lifetime by the average American) [on the other hand, I've taken far fewer showers than the average American] doesn't quite register intellectually. So the producers of Human Footprint recruited volunteers to lay out 28,433 rubber ducks (each representing one of those showers) spreading from the second-floor bathroom of an ordinary house, down its stairs, out the front door, across the yard and through the neighborhood all the way to a nearby pond.

Ever seen 19,826 eggs (an average lifetime diet) cascading onto a warehouse floor? You will on this show. [Reason enough to watch in itself!] Maybe most amazing of all: an artful arrangement of 43,371 crumpled, discarded soda cans.

No special effects are used in the program to illustrate Americans' consumption of resources, which - bottom line - exceeds the planet's ability to replace them. . . .

So says Frasier Moore, television writer. Bottom line, absolutely no doubt, you're an evil fool if you think otherwise, you planet-killing dickhead retard. 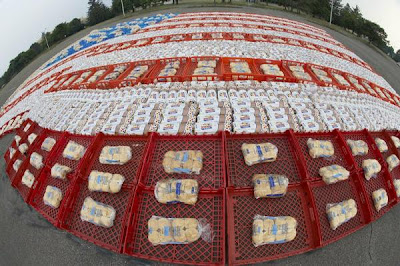 From the show: Fisheye view of American flag made of (white) bread.
Posted by Focko Smitherman at 3:20 PM