Pelosi: I pronounce this convention "green"

The House speaker was in town today for the world-historical event. So, guess what the big innovation is, the thing that will make this convention the greenest and most environmentally conscious in his-toe-ree:

A carbon-offset contest. Swear to God:

House Speaker Nancy Pelosi came to Denver this afternoon [did she buy carbon offsets?] to help launch a green Democratic National Convention this summer, calling the effort a "moral responsibility." . . .

The initiative is the Democratic National Convention Committee's Green Delegate Challenge. DNCC Chief Executive Officer Leah Daughtry said they set up a contest for all of the states sending delegates to the convention Aug. 25-28 to buy offsets for the carbon footprint they'll leave by traveling and staying in the metro area.

Delegates can purchase an offset from Native Energy for about $7.50. Offsets are a way for a person to figure how much carbon they would put in the air and, by purchasing it from a company, that company promises to eliminate the equivalent amount emitted somewhere down the line.

Native Energy [my linkie] is a firm based in Oregon and Colorado that calculates carbon footprints.

The state with the highest participation by percentage of delegates will win a variety of prizes, including being recognized in their seating on the floor of the convention in the Pepsi Center.

Gov. Bill Ritter and Mayor John Hickenlooper praised the efforts of the DNCC — with the mayor saying, "They chose a city with a green heart."

Update: Picture of "Otto Grotewohl, Member of the Politburo and Minister President of the GDR, talking at the V. Party Conference of the SED, July 13, 1958" from the archives of the former Museum of German History. Interesting site: 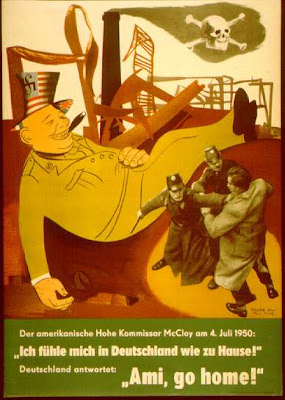 Note swastika-flag hat and poison-belching smokestack. The GDR: model and moral exemplar for today's eco-peacenik.
Update II: El Presidente of Slapstick Politics (who will never step down, never!) contributes a little mockery of his own.

Update III: We're being too harsh. Much more is going on besides some stupid and pointless carbon contest. In the Post, Denver Mayor John Hickenlooper (the papers call him "Hick") vows:

Posted by Focko Smitherman at 10:54 PM