Remember the zip drive? It and its companion disk were (very briefly) a miraculous medium, letting one store scores of "floppies" on a single disk. (For my younger readers, a "floppy" was a--what are you doing up? Go to bed you little bastards, before I brain you with this beer bottle!).

But when I got a new (now old) computer I quit using the drive ("unlimited space! bwahaha," &tc., thought I, wrongly) and stored the disks--without moving their contents to my hard drive.

I finally got around to doing that this weekend and discovered a veritable cornucopia--mainly pop songs and old-time radio shows (like Jack Webb's hilariously hard-boiled detective Pat Novak: For Hire) I got off Napster when it was the civilization-destroying menace people of a certain age remember so fondly.

There were also a few pictures, like these from Desolation Canyon, a whitewater section of the Green River. They were taken, I believe, by John W. Doyle, who doesn't know I'm posting them (don't worry, he'll get his royalties): 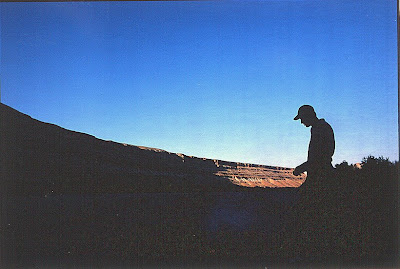 Dusk. This one's like a Marlboro ad or something. 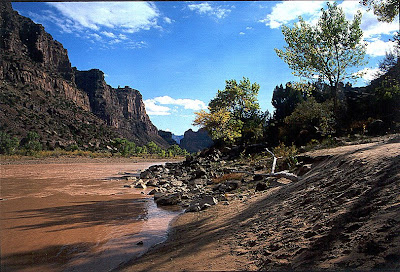 Another dusk. I don't know why.

All right, as you were.

Update: Speaking of old-time radio and "as you were," here's a couple of minutes of "The fleet's lit up," Lieutenant Commander Thomas Woodrooffe's rather unfortunate BBC broadcast during the review of the British fleet in 1937. Constant Tim Blair commenter "Whale Spinor" linked to it on the thread to this post, and it's pretty funny.
Posted by Focko Smitherman at 8:04 PM