One Big Union, and make it decaf

Rightie radio gink Michael Medved interviewed a barista at a New York Starbucks yesterday who's helping the International Workers of the World--yes, the One Big Union, the Wobblies--organize among his brother (and sister, who are known as beristes) baristas.

I didn't hear much of the interview, but this particular barista, a Cornell grad in his early 20s, said he made just over $10 an hour including tips and worked less than full time. Zippo bennies, or damn near. Revolution, gang!

Of course, the incongruity of the (historically) he-man, ultra-prole IWW organizing among kids whose parents can afford the small-country GDP it takes to send them to places like Cornell wasn't lost on Medfred either. Actually it more reminded me (warning: Simpsons reference) of Homer's union, the Amalgamated Pastry Chefs, Ballet Dancers and Nuclear Plant Workers. (Their logo was very cute, but I can't seem to find it on the internets.) 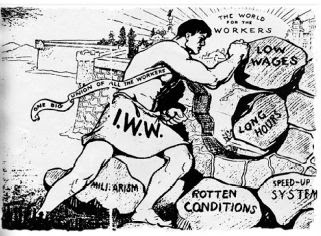 Starbucks barista (1906).
Update: The IWW has a pretty fancy-pants website. I am so at the Cream City Collective's "Wobblies Movie and Potluck" in Milwaukee this weekend.
Posted by Focko Smitherman at 4:08 PM