Age columnist Terry Lane, whom Tim Blair hilariously mocked for swallowing the Jesse Macbeth hoax well after Macbeth had been exposed, notes that Lane has once again neglected to, in the arcane jargon of journalism, check his facts, and gullibly believed a ridiculous claim:

A recent press release from the organisation Public Employees for Environmental Responsibility draws attention to the fact that rangers in the Grand Canyon National Park are forbidden to answer visitors’ questions about the age of the canyon because the truth will upset Bush’s fundamentalist supporters.

Of course, anyone the least bit curious or even conscientious would check this out, but Lane's hysterical anti-Americanism makes him reckless. Again. "Park Ranger X," among others, debunked the claim almost two weeks ago.

This is all just an excuse to post a couple of pics of the Grand Canyon from a trip way back in '88 when we walked from the North Rim down to Cottonwood Campground on the canyon floor.

It's only seven miles down--and, logical thinkers will realize, back up--but over about five miles of that the trail drops 6,000 feet. It's also hotter than hell, and the goddamn muletrains force you over and over to stand on the brink of cliffs thousands of feet high while huge, snorting, pissin' 'n' crappin' animals, all riding mules, pass within six inches of your face. Oh, and you're wearing a big ol' backpack. I was a little traumatized. Pictures! 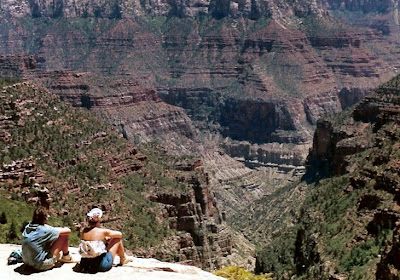 Complete strangers looking down from (or perhaps, to be fair, across) the North Rim of the Grand Canyon. Luckily for their sanity, they never knew of the Drunkablog's Trial by Mulefart. 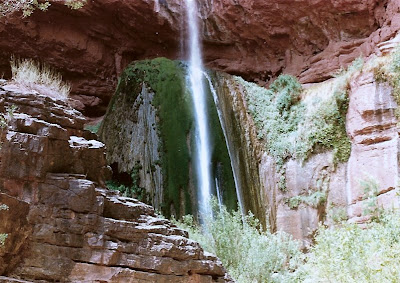 Ribbon Falls. There was a couple, um, enjoying nature behind the mossy rock. Before you get all het up, though, remember that they probably smelled strongly of mulefarts.
Update: The Age should be rebuked for keeping Lane around, but they redeem themselves somewhat by running important stories like "Sex dispute ends in tractor rampage."

Update II: Park Ranger X has what I'd call a legitimately pseudonymous blog. Unlike, say, Benjamin Whitmer, PRX doesn't hide his identity to slander and threaten, but because he wants a career with the Park Service.

Update III: Not that kind of "ho," you mor--er, loyal Drunkablog readers!

Update IV: The Skeptic has a long, convoluted explanation of why they too fell for PEER's press release. It boils down to the usual case of fulminating BDS.

Update V: Holy shit, I got linked by Tim Blair. In the same post as Jim Treacher. I can die now. But I'm gonna take all of you with me (you know how Americans are).

Update VI: Forgot to say, look around while you're here. The Ward Churchill stuff is always (well, never) good for a laugh, and there's lots of it. In particular check out the link above (now below) about Ben Whitmer, the University of Colorado instructor who used his anonymous blog to defend Churchill with the crudest kind of slander and invective, and got caught.

Update VII: Blair links to a January 3 post at Seattlest--more than a week before Terry Lane's column--mea culpa-ing for swallowing PEER's claim. By way of mitigation the poster includes links to a bunch of other folks who fell for it, including Time back in 2004. Language is so fungible. The Seattlest writer says PEER merely "intimated" that the Park Service wasn't allowed to discuss the scientific age of the Grand Canyon, but then quotes the opening line of their press release: "'Grand Canyon National Park is not permitted to give an official estimate of the geologic age of its principal feature . . . " and calls the flat lie "a disingenuous start."

(credit: Muletrain from about.com)
Posted by Focko Smitherman at 3:50 PM