There's a site (or maybe tons of them) on which people post "found writing"--basically, stuff somebody finds that, you know, has writing on it.

At least I thought there were sites that did this, or at least that there was something called "found writing," but all I can "find" by googling the phrase are things like:"It was fulfilling to take a whack at writing. Best therapy around. I found writing good for the soul"; and "Gregg Louganis found writing an autobiography was was therapeutic."

Whatever it's called, it's out there. Here are a couple I found in the yard, just by way of example: 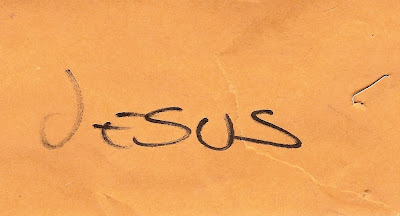 Note staple: Jesus probably didn't get even a little taste of what was in this envelope.

The other one I found a couple of years ago, but it's gotta be the same kid: 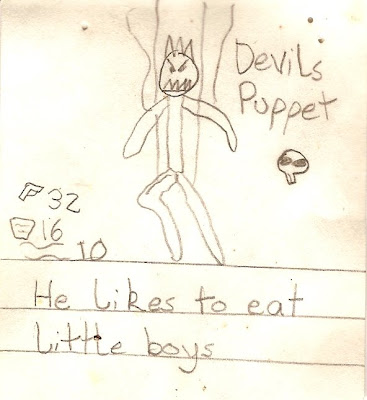 The devil doesn't bother me, nor the skull, nor the mysterious numbers (note how one is EXACTLY double another. It's like the Da Vinci Code!). No, it's the whole creepy package. Sure hope they don't leave the family pets alone with this kid.

Update: You're all afraid, aren't you? That's why no comments. You think the kid might show up at your house sometime. With a knife.
Posted by Focko Smitherman at 10:40 PM