More pics from the Buffalo River in Arkansas. 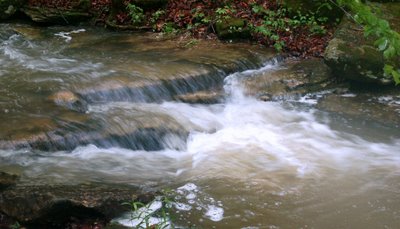 Another waterfall. What was that? Did you say something? Oh, I've got lots more waterfall pictures, don't you worry about that, me fine Sonny Jim. 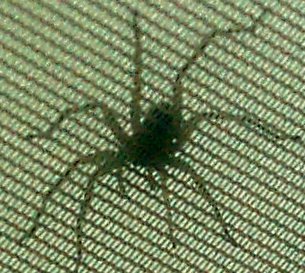 Eeeeeeeeeek: A spider. It squatted on the mesh outside the tent and stared at the Drunkablog for hours that first rainy night as he (the D-blog) tried to read Glenn Reynolds' An Army of Davids. That's probably why he just wasn't getting into the book, though it might also have been the fact that Reynolds, while a great blogger, is a fairly flat writer. [Crickets.] Yup. A spider. 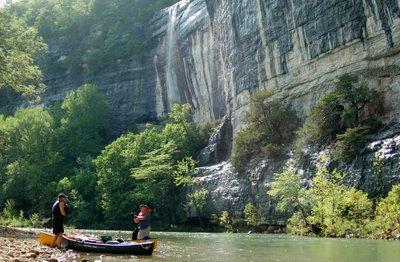 Ming and Bubba belly up to a gravel bar. Canoeing tip: Bubba is wearing a "PFD" or "Personal Fartation Device." These ingenious but bulky machines break down potentially eco-hazardous human farts into their constituent elements, cheese and beer. Every serious canoeist should have one. (Yes, a fart joke. Look, conversation among people on river trips (men and women--ask the D-a-W) tends to drop almost immediately to the lowest common denominator, which is, of course, farts. It takes awhile to work back up to normal human conversation (some never fully recover the capacity for it.)

Update II: That spider is freaking me out. Hell, I took the picture and I still have trouble with the illusion that he's inside the tent, ready to pounce. Just to descarify him, here's the original pic:

Itsy-bitsy or teensy-weensy? You decide. In any case, he was
just a l'il fella hiding from the rain.
Posted by Focko Smitherman at 7:44 PM