Get ready for torture!

The Transform Columbus Day Alliance invites you to hear two days of expert testimony on the historical reality behind the celebration of Columbus and the 500-year Columbian legacy, as well as personal testimony by people whose lives have been affected by the celebration of Columbus Day. Invitations have also been sent to organizers of the Columbus Day Parade, to Denver mayor John Hickenlooper and to Colorado Governor Bill Ritter to offer their perspective on the holiday.

After hearing testimony, the Truth Commission will issue findings of fact, and recommendations about how Colorado and the U.S. might move forward from the division and acrimony of the past to a future of mutual respect and historical integrity

A hundred years, next year [that Columbus Day has been celebrated in Colorado]]! This is it! This is the last chance they have [to end the parade and/or the state holiday]! Next year, all bets are off!

I had my culture stolen by these parasites (Columbus Day paraders) the same way the Klan used to hide behind their white sheets to voice their racist views!

Uh-huh. This is shaping up to be a bigger disaster than the National! Emergency! Forum! for Ward Churchill. At least that had a free commie-catered lunch.

A report, along with audio and video documentation from the hearings, will be available for educators, students, and political, religious and community leaders.

Thank goodness, for I find that I shan't be able to attend, dash it. Being at once an educator, student, and political, religious and community leader, however, I should be able to obtain a copy easily. In any case, El Presidente (via whom, by the way) said he planned to spend his own personal weekend videotaping every second of the event. He did. Said he'd just bring a bag lunch, and not to worry about him. 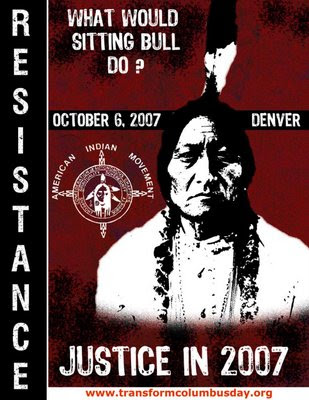 Posted by Focko Smitherman at 11:36 PM