One day when I was still in high school my sainted mother nagged me away from the bong long enough to dig up a flagstone patio in the back yard. This patio stood in the way of progress in the form of a redwood deck my mother wanted to build, and was ugly as hell to boot, having been laid with green, purple and red flagstones.

So I got my trusty shovel and started digging. Putridly colored as it was, the patio had been built well; larger and much heavier stones were laid underneath to form a level substrate. These stones, I eventually noticed, were shaped amazingly like tombstones. Odd.

It was probably several hours later (remember the bong?) that I finally noticed something else: there was writing on these stones. Writing like this: 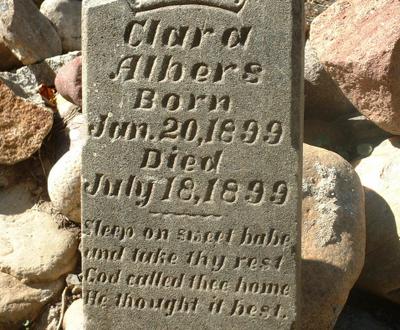 It wasn't much of a mystery. My mother's house, which is (now) close to 150 years old, had once been owned by a headstone maker, and he'd laid the patio with his bad jobs. Well, duh-uh (aka "double-duh").

Update: Neither "mother" is the Drunkablog's real mother, of course, no matter how much he may wish one were. The first, in fact, should be familiar to regular readers if any as the fetching "Mother Watson," whom the Drunkablog introduced here and whom he digs up (!) at need. (Hey, this post is kind of Halloweenie!)

Posted by Focko Smitherman at 10:33 PM