The Drunkablog: Not marching for social justice!

Tomorrow is the annual Columbus Day Parade and Mass Arrest here in Denver. The Drunkablog will give it the full--well, the mini-Zombie if he can drag his huge yet shapely ass out of bed early enough.

The northern gathering point being mere yards from the Drunkablog manse, he walked down and got a few pics: 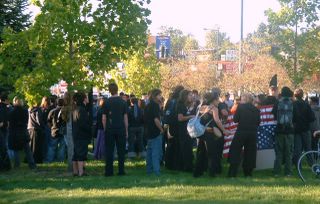 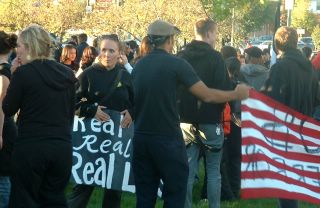 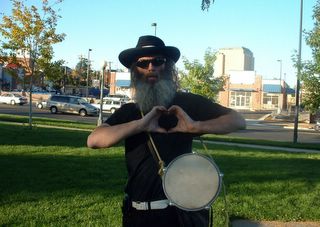 This dude yelled to some middle school kids in the crowd, "What's the 10th Amendment say?" They didn't know. "Power to the People!" he yelled. Then he made them yell "power to the people." Then he followed me around until I took his picture. He's making a heart. 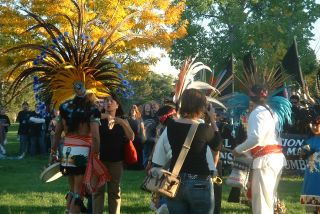 Montezuma's headdress blends into the tree quite artily, doesn't it? Drunkablog meant to do that. 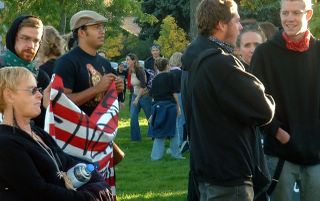 Okay, here's a shot of the the two guys who were actually
holding the "End U$ Terror" flag. Notice anything missing? 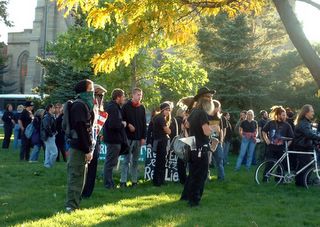 Identity concealing bandannas! The one accessory no well-dressed anarchist can be without. But guys, you should really conceal your faces before "The Man" (i.e., Drunkablog) takes your picture with his super-secret sleuthing camera. 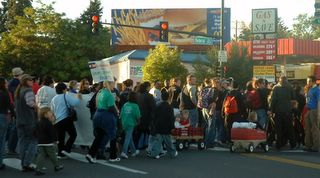 It was actually a fair-sized crowd. Maybe 300 or so. 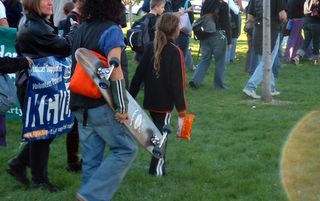 But of course there was mass transit for the ride home.
More pictures tomorrow!

Update: The Rocky Mountain News' account quotes another marcher's sign: "Columbus was a terrorist."
Posted by Focko Smitherman at 9:44 PM