In recognition of this special time of the year, the Drunkablog, in association with Drunkablog Productions and Peter Guber, presents

Jimmy Kirkland and the Plot for a Pennant!

What do you think of that kid, Slats?" inquired Manager Clancy.

"He's a ballplayer, if he don't swell," responded Hartman, laconically.

A swarm of reporters descended upon the headquarters of the visiting team, striving to discover something of the history of the slender, red-haired youngster whose coming had revived the waning pennant hopes of the Bears. 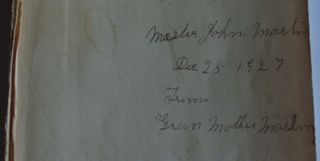 Written on the flyleaf of A Plot for a Pennant. "Gran Mother Martin" is my great-grandmother, as you might surmise from her spelling.

"It's a secret, boys," responded Clancy to their insistent questions. "He is nom de plume and habeas corpus. The only place I ever heard of him playing ball was in Cognito."

"Suppress the comedy and ease us the legit," pleaded Riley, who wrote theatricals when he was not inventing English in the interest of baseball. "What'll we call him?"

"Say," replied Clancy enthusiastically. "I dreamed last night I had found a pot of gold wrapped up in a million-dollar bill, with a diamond as big as my hand on top of it. Call him Kohinoor."

So Kohinoor McCarthy sprang into fame in a day as the mystery of the league. 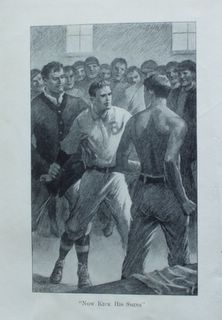 Kohinoor introduces himself to a teammate in
a very odd (not gay!) manner.

Written by Hugh S. Fullerton, Jimmy Kirkland and the Plot for a Pennant was published in 1915 and may have had a role, according to no less an authority than Gene "Two Finger" Carney on his website Notes from the Shadow of Cooperstown, in the legendary Black Sox Scandal of 1919. Carney explains (but read the whole thing by scrolling down to "Life imitates Art Dept."):

Jimmy Kirkland and the Plot for a Pennant was published by the John C. Winston Company in Philadelphia in 1915. It was the third in a trilogy of Jimmy Kirkland books. What makes the book most interesting is its author -- Hugh S. Fullerton, the fellow who did his best to uncover the Fix of 1919 while reporting for the Chicago Herald & Examiner, during the Series, right after, and then again that December.

Fullerton's Jimmy Kirkland series is for juveniles, but it stands up well as good baseball literature. Fullerton was not just a good reporter, he was an early analyst, a "dopester" who got people's attention when he predicted the "Hitless Wonder" White Sox would topple those dynastic Cubs in the 1906 Series, and they did, 4 games to 2.

Fullerton wrote major-league level books and articles on baseball strategy, and that spills over in his fiction.

Now here is the Twilight Zone part of the story. In his 1915 novel, gamblers and players conspire to throw games. Actually just one player -- the team's ace Lefty, last name Williams. It seems Lefty is in debt and owes the thug [named "Barney Baldwin"] who is orchestrating events. So though he is normally a fine control pitcher, he walks some batters that lead to runs and to losses. . . .

The fixers in 1915 also try to frame the team's third baseman. I wish his name was Buck, but it wasn't -- his nickname was Kohinoor, a tag that never became very common, for some reason. (The Kohinoor Diamond was famous back then.) The third baseman is actually the hero of the book, surviving a kidnapping in the nick of time, to save the pennant.

Fullerton includes a self-portrait, I do believe, in the character "Technicalities" Feehan, a writer who keeps track of all sorts of odd stats. His calculations of the number of hits toward third base, with and without Williams on the mound, helps convince the manager that the fix is in, and "Technicalities" has a later role in the rescue of the hero. If you keep Hugh Fullerton's face in mind as you read the book, it's really fun. . . .

What is interesting is that Fullerton wrestles, for 340 pages, with some terrific questions. What should a player do, if he suspects his teammate is laying down for gamblers -- or for anybody, even for the team owner? What's a manager to do,when things start smelling foul?

If Kid Gleason had read Fullerton's book, he'd have gotten this idea: confront the player (eg, Lefty Williams), tell him you know what's going on, then make a counter-threat: I'll let you pitch, but I have people in the stands with flyers, ready to tell the fans that you are tossing the game. If you don't win, these flyers will be released, and the fans will tear you apart before you can reach the dugout. Any questions?

Given that choice (in the most crucial game yet), Lefty tries his best, but still is tapped for a couple runs. Fortunately, his team rallies, and another pitcher finishes the game. A happy ending for the good guys, of course. Not like 1919 in that

When the suspicions surrounding the third baseman are proved phoney, and he next takes the field, the crowd responds with round after round of applause. "It was the American spirit of fair play and justice revealing itself, and the crowd, accepting Manager Clancey's confidence in his third baseman, rendered its verdict of not guilty in cheers." Buck Weaver never got to hear such applause from any major league ballpark crowds, but I suspect that as he toured around playing "outlaw ball," he heard something similar, from fans who knew he played the 1919 Series to win. Jimmy Kirkland and the Plot for a Pennant may have been read by Kid Becker, Abe Attell, Billy Maharg, and others.

What an irony that would be, if Hugh Fullerton -- no one was more determined to uncover the Big Fix of 1919 --had the idea first. 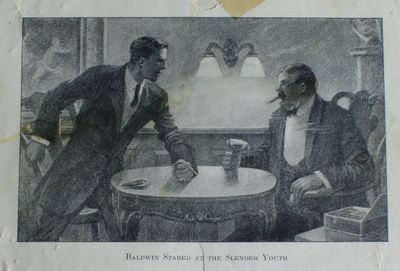 Pretty wild. More fascinating to the easily distracted Drunkablog is that in this drawing Kohinoor's left arm is about eight feet long. The artist, Charles Paxson Gray, had serious problems with perspective.

Posted by Focko Smitherman at 11:44 PM