Keeping you safe from left deviationism! It's NorthDenverTribuneWatch!

Time for another edition of NorthDenverTribuneWatch. Let's see "what's happenin'" in North Denver this bi-week!

La Llorana wanders the riverbed alongside the Rude Recreation Center at night, says 33-year-veteran Darlene Robles. She cries, grief stricken and tormented for her drowned children--murdered by her own hand. . . .

[Another] old-timer, Nick Nichols[,] has stories about the haunting at Rude Center that go back 30 years. "I hear someone," he says, "jumping on the diving board in the pool." . . . He indicates there's not anything peculiar about the sound of a swimmer going off the diving board at a Recreation Center's pool. Unless, he says, you understand "we had the diving boards taken out ten years before that."

(Fuller disclosure: the Drunkablog will need his nightlight tonight. Then again, maybe not; it's pretty scary too.) Here's the art that ran with the piece: 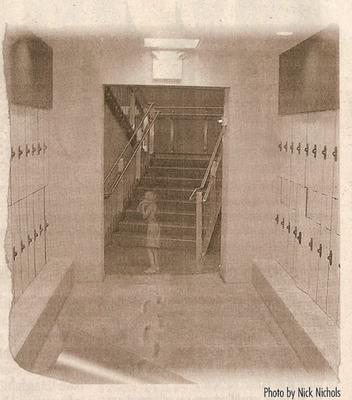 Photoshopped--or not? La Llorana is fresh from a dip in
this exclusive Tribune photo.

A brief on page three begins, "Jefferson Park developer Barbara Baker is renovating this building on 26th Avenue. . . . If you know about the people and businesses that have occupied this building please
contact. . . " Here's a slightly better picture than the one the Trib ran: 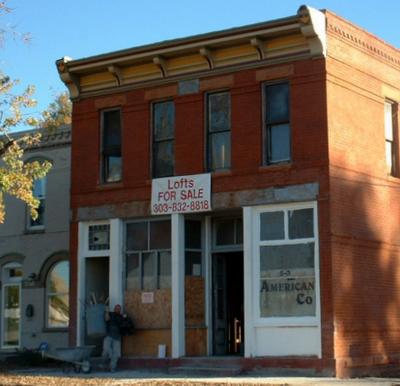 Since it's only a block from my house, I know a couple of things about the structure. First, for the last eight years at least it's been a biker hangout. Second, when I say "biker hangout," I mean of course that bikers actually ride their Harleys around inside the place.

The new owner was there today and I asked what the "lofts" would sell for. He said "Oh, there's no telling what we'll be asking. $350,000 or more." Wonder if the bikers get first shot? Whatever; this just hastens the inevitable day the Drunkablog spread is voted out of the neighborhood--for good.

"The Great Empire Rolling Over"

That's this issue's guest editorial, by a guy laboring under the name "Bill Bonner." Let me quote the last paragraph just for yocks:

America has grown old and decadent, along with its leading corporations. The voters still vote. But who really cares what they vote for? The empire has a life of its own...a destiny to be fulfilled...a banana peel to slip on. The people vote, but it is the custodians, the managers and politicians who run the great empire who get the loot.

They have a Columbus Day protest story! Aw, nothing interesting except one quote: "'I'm very against celebrating Columbus. He was a genocidal maniac and this parade is a genocidal convention that celebrates him.'"

Update: Drunkablog must point out here that Rude Rec is actually a wonderful, and well-maintained, facility. I definitely don't want them pissed at me. They have these cool t-shirts that say RUDE across the front in five-inch letters. If I'm nice maybe they'll give me one. (Hey, shilling for freebies! Look ma, I'm a journalist!)

Posted by Focko Smitherman at 8:09 PM