The Drunkablog actually finished throwing up early enough to make it to the Columbus Day Parade and counter-protest in downtown Denver this morning.

And after all the hype, it was a fairly tame affair, by which I mean there were few if any arrests. Here are some pictures, with comments where necessary (i.e., everywhere): 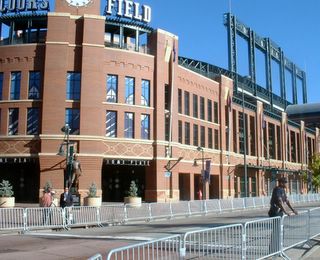 Coors Field at the end of the parade route. The area was nearly deserted half an hour before the parade started. 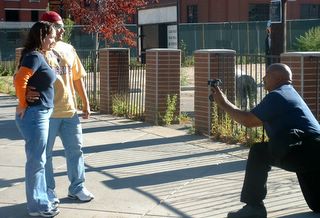 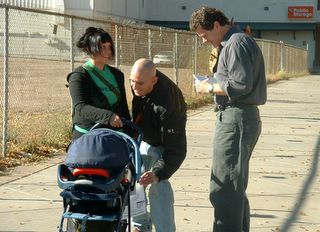 Kitchie-kitchie Kulturkampf: Neo-Nazi family unit
being interviewed by a Rocky Mountain News reporter (see updates IV and V at once!). 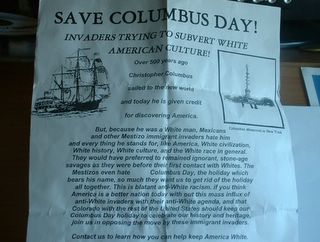 The flyer the boy Nazi was passing out. 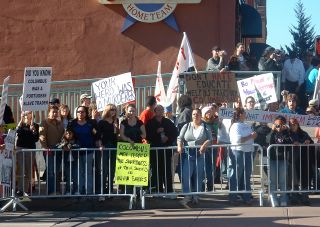 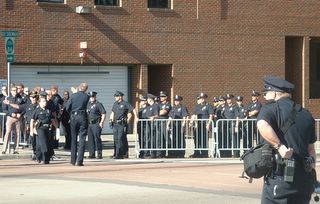 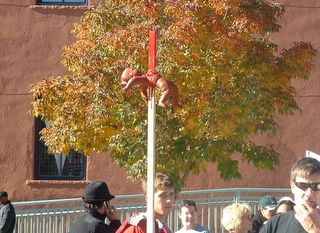 And surprisingly, Ward Churchill was there. Don't know if he'd just returned from hangin' with Hugo in Venezuela, as had been rumored, but he didn't do anything here except watch and chat and smoke cigarettes. 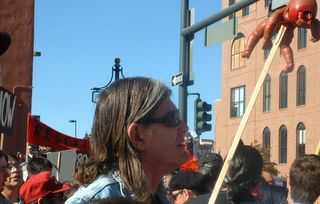 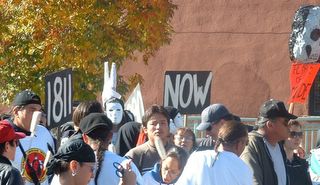 The guy in the mask freaks me out. 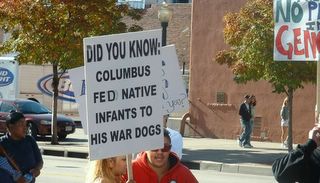 Drunkablog did not know that. 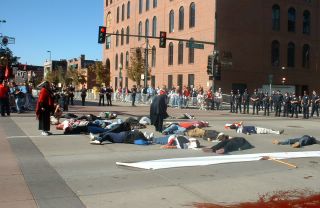 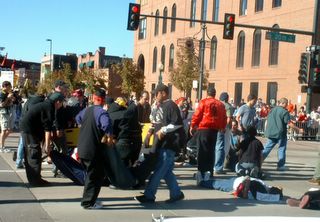 And finally, an innovation: Protesters carry off their own dead. I assume they did this to avoid breaking Denver's anti-obstruction ordinance. 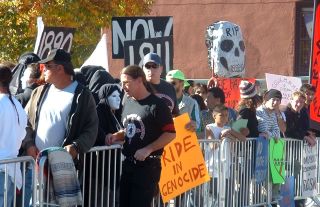 Glenn Morris, who has organized the Columbus Day protest for many years.

Talk about selling out. I was standing next to Morris when the parade was almost over. What appeared to be the top cop there, whom Morris called, I believe, "Ray," came over and said "Good job, Glenn." And they shook hands. 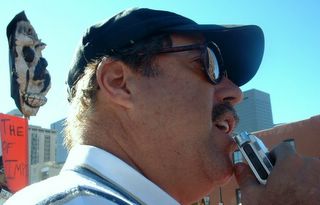 Surprisingly voluminous KHOW radio guy Craig Silverman (he sounds like a midget with a head cold), who with partner Dan Caplis has covered the Ward Churchill dustup almost from the beginning--though, of course, after Drunkablog was "on it." 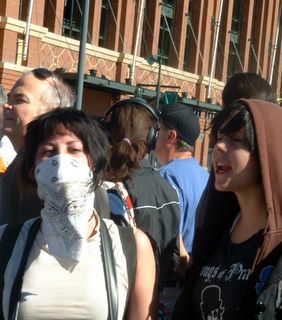 Phew, a bandanna. Finally it's a real protest.

Update: Unfortunately my camera chose yesterday to (literally!) implode, so I've been using a borrowed 2-megacrapsel thing with a 32-mb card. In other words, I didn't get many photos of the actual, you know, parade. In fact, the last two above were the only decent ones. You aren't missing much. It was small (heavy on the motorcycles) and reasonably defiant as it marched past the protesters, who booed and yelled "Shame!" Fine, fine.

Update II: The Rocky's story, oddly, is by AP reporter Judith Kohler. Look, I swear the Nazi told me the guy who interviewed him was from the News. Maybe they're going to use his story as the "story of record."

Update III: Since, as I point out above, Glenn Morris and the cops appeared to be cooperating completely, the Rocky's headline--"Protesters attempt to block parade route"--is utterly bogus. They were out of the way several minutes before the parade got there--as the story points out.

Update V: It was Spencer, all right: